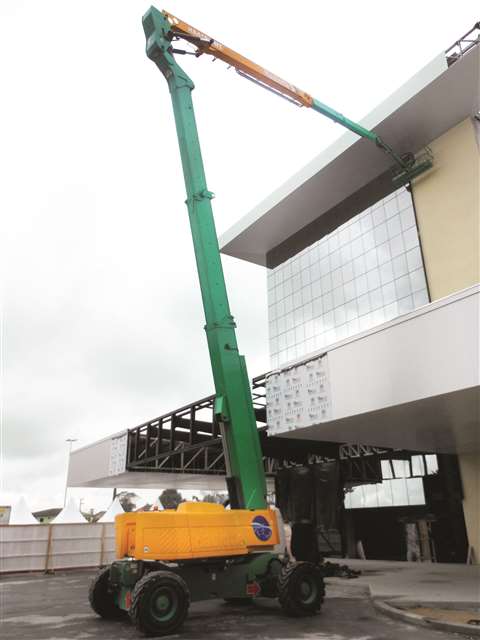 The future is looking good for users and manufacturers in Latin America, but understanding the pitfalls and working around them is key to success. Euan Youdale reports

Infrastructure projects are leading the way in Latin America, with multi-billion US dollar road and rail schemes in progress. The 2014 World Cup and the 2016 Olympics, both taking place in Sao Paulo, Brazil are the subject of vast investment, while mining and oil and gas is booming in the likes of Peru, Chile and Argentina.

This massive investment in infrastructure could not have come too soon for the powered access industry in Latin America, for which transportation difficulties is one of the biggest challenges.

Talking about the aerial work platform rental sector in Latin America, Jim Roest, Riwal director general in Brazil, says it is becoming increasingly well organised and safe, with the big players holding a vast majority of the equipment. He says, “We see some start-ups that operate locally and a few mid-size players setting up branches elsewhere, but still around 5% of the companies have more than 50% of the supply.”

Mr Roest forecasts that by the end of this year there will be more than 150 powered access rental companies in Brazil, South America’s biggest access equipment market, with a total fleet close to 25000 units.

The latter figure is confirmed by Sérgio Kariya, director of the rental operations of Mills Estruturas e Serviços de Engenharias, Brazil’s largest access equipment rental company in terms of fleet size, with 4292 units. Mills is planning to invest R$274 million in new access equipment by the end of this year and is expecting the sector to grow for the next 10 years, whatever happens to the economy.

Brazil’s second biggest rental company Solaris has plans to double in size. It currently has revenues of $20 million and runs a 3200-strong fleet. In September Solaris’ parent company Sullair Argentina sold a 70% stake in the company to Latin American private equity firm Southern Cross. The deal, valued at more than US$100 million, includes the Sullair Brazil sales division. Sullair Argentina, which also operates a major rental business in Argentina alongside its sales activities, will retain a 30% share of the Brazilian businesses. Diego Stark, a partner at Southern said the capital contributed by his company would be used to expand the business.

So, it seems, the rental sector in Latin America is heating up. Marcio Santos Cardoso, JLG Industries’ vice president of sales and market development for South America says, “The rental environment is very competitive. One of the key elements is logistics; setting up more branches in order to be closer to the customers. Brazil is a very large country and being able to reach the customers can be a challenge but we do see it growing.” Mr Cardoso adds, “Customers in Brazil are price-oriented. They are looking at who can give them more for their money.”

Wrapped up with this new era of competitiveness is a plethora of challenges across Latin America in terms of bureaucracy and trade. Mr Roest explains, “All issues are connected and each has its complex peculiarities. Import duties, but most importantly, national or state taxes will cost you a lot of time and money. Bureaucracy, of course, is also part of that and it is important to understand how to handle it.

“Finding and keeping the proper people and business partners is perhaps the most difficult challenge in Latin America. It is important to train your staff and coach them to work as a team, making them aware that rental is a service.”

In addition, says Mr Roest, poor road Infrastructure, coupled with great distances, means delivery of equipment is expensive and challenging; and local differences in working methods can make it difficult to provide a standard service. Adding to that list, Mr Cardoso says the biggest challenge in Brazil is the exchange rate between the Brazilian Real and the US Dollar. “Because of the devaluation of the Brazilian currency, much of the equipment has become more expensive and the invested capital is no longer attractive. Investments are being redirected to other countries.”

Another problem is the cost of capital. Mr Cardoso explains, “The government has increased the interest rates, therefore, the costs have increased, making capital harder to access. For South America, the dollar appreciated globally not just in Brazil, so investments are returning to the US and this impacts our overall industry.”

However, these challenges go hand-in-hand with doing business outside the West, says Mike Falcon, Snorkel’s regional sales manager for Latin America. “There are challenges when importing machinery into Brazil, but Brazil certainly isn’t unique in that regard, we have similar challenges in other markets like Russia and China. The most important element in overcoming these challenges is to have a really strong, competent indigenous distributor. They know the best way to negotiate any red tape.”

France-based Haulotte’s subsidiaries in South America cover what it describes as the key markets: Argentina, Brazil, Chile and Mexico. “Brazil and Mexico are growing compared to 2012 with double numbers, in terms of percentage, and are among the most attractive AWP markets in the world,” a company spokesman told AI. “But it is also important to mention Argentina, Peru, Colombia, Venezuela,” adds the spokesman, describing those four countries as ‘emerging markets’ within Latin America. He believes they are crucial for long-term success in the region.

Choosing the right time to set up major subsidiaries in Brazil, let alone other Latin America countries can be a tough call, considering the differing economies and challenging environment, and so far, as AI understands, no manufacturer has set up an assembly plant there.

In January this year, JLG Industries opened its newly renovated 11200 square metre parts and service distribution centre in Indaiatuba, Sao Paulo, Brazil. And in September Skyjack celebrated the first year in operation of its parts and service centre, also in Indaiatuba. Rafael Bazzarella, Skyjack territory manager for Latin America, explains, “This benefitted our customer by eliminating the traditional long lead times associated with getting product into the country. We also assembled a team with extensive market experience to provide the best service to our customers. Our key differential has been the Skyjack philosophy of immediate availability of parts and equipment.”

Manitou might be the first one to take the leap into assembly in Brazil. The telehandler specialist is setting its sights on the so-called BRIC nations, with a special focus on Brazil and Russia. Interim CEO Dominique Bamas said the assembly plant could be set up in the next two years and would be its only new facility of this type in the immediate future. “It’s very complicated to import products to Brazil - import duties are very high, so we would need to have a small assembly plant just to avoid taxes.”

As previously stated, Latin America has a need for a wide range of products thanks to its diverse applications and nations. According to Haulotte, electric scissors are, as elsewhere, in biggest demand, although other products are increasingly popular, such as booms and telehanlders in the mining, oil and construction industries. “Overall the market is requesting easy, user friendly machines. Latin America customers are less demanding in terms of ‘features’ compared to Europe.”

Firmly on customers’ wish lists, however, are fast and productive equipment. Most recently, in July, Haulotte launched its new fast erecting 23 m HT23 RTJ telescopic boom in Latin America at the company’s own Expo-Haulotte in Mexico, along with other company-organised events in Brazil and Argentina. “We are anticipating customers’ needs by listening to them first and after will introduce special products that we believe from our knowhow will bring benefit to the users.”

Towable, trailer-mounted booms are proving popular for UK-based manufacturer Snorkel in earlier-stage markets like Colombia and Uruguay. “We see more demand for entry-level machines with low transportation costs, making them more appealing to contractors. Elsewhere our 46 foot articulated booms are very much in demand because they are such versatile lifts,” Mr Falcon comments. “In general terms, the most popular models are the Snorkel A46JRT and A46JE articulating booms. These 14m mid-size booms hit the customer ‘sweet spot’ for working envelope.”

The A46JE is 100% battery powered and is ideal for interior use in industrial maintenance and inspection applications, says the manufacturer. Embotelladora Andina, distributer for Coca-Cola products in Chile, Argentina and Brazil, and based in the Chilean capital of Santiago, invested in a Snorkel A46JE electric articulating boom lift and a Snorkel S2646E electric slab scissor. The 11.5 m platform height S3970RT, the latest addition to the Snorkel range of compact rough terrain scissors, will soon be available in Latin America.

Beyond markets trends and internal bureaucracy, safety rears its head as another major challenge in Latin America. Understandably, safety levels vary greatly from one work site to another, and often deteriorate the further you travel away from a major city. That said, major rental companies like Mills and Solaris, as well as manufacturers are doing their best to improve the situation. The government is also making a stand. For example Skyjack is working with the International Powered Access Federation’s (IPAF) Brazilian council to ensure equipment conforms to the new Brazilian NR18 standard, which incorporates access equipment

Mr Bazzarella, explains, “The new directive is very similar in nature to the existing ANSI and CE requirements so no modification will be required on the equipment but there has been a focus put on adequate training of instructors and operators of AWPs in Brazil.”

JLG is also working with IPAF to promote safety and training in Latin America. Mr Cardoso explains that Brazil is leading the effort in implementing safety measures. “Other countries are following Brazil’s lead, mostly by international companies, who already came to the country with some safety measures in mind.”

More needs to be done, however, in countries like Peru, Uruguay, Bolivia and Paraguay, adds Mr Cardoso. “In addition, JLG is getting involved with organisations associated with promoting safety measures, not only in Brazil but throughout Latin America, for example, IPAF.

Terex AWP, another bastion of safety in the workplace, supports regulation, but warns that it must be sensible and workable. As Luís Jucá Nunes, Terex Latin America aerial work platform sales manager says, “Norms and regulations are welcome and necessary as long as they do not become a burden to the use of AWPs in this market.

But Mr Nunes adds, “Establishing responsibilities and guidelines is important especially when the conversation revolves around maintenance and operation training. Manufacturers, dealers, rental companies must spread consciousness about the safe use of the equipment.” On a final matter, are manufacturers doing enough to support rental companies in Brazil and visa-versa? Mr Roest gives Riwal’s opinion. “The cooperation between manufacturers, suppliers and rental companies is a challenge. With an inadequate infrastructure that creates logistic difficulties and constantly relying on a handful of skilled professionals, support is limited. Rental companies are depending on the suppliers to bring local expertise to solve the common and unexpected problems.”