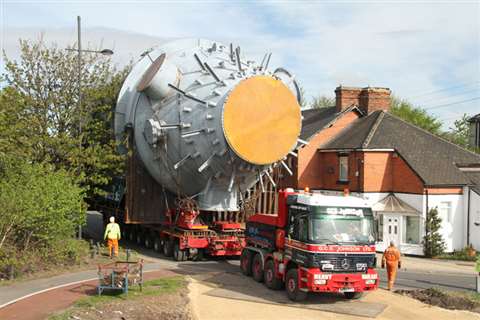 Average height for the transports was 12.5 m and each load weighed around 50 tonnes

The north east of England has recently seen the development of a renewable energy facility by industrial gas company Air Products. The Tees Valley Renewable Energy Facility (Tees Valley 1 and 2) are two of the most ground-breaking renewable energy projects in the world and are the first of their kind in the UK.

The facilities use advanced plasma gasification, which converts waste into energy. The plant will be able to take in 950 tonnes of waste per day, enough to generate 50 MW of electricity. It is expected to power up to 50,000 homes and divert up to 350,000 tonnes of non recyclable waste from being disposed in landfills each year. The plant also has the potential to generate a renewable source of hydrogen for commercial use, such as fuel for public transport. The non hazardous inorganic by product of this process can find be used in road bed construction.

The construction of the facility was carried out by contractor Foster Wheeler Construction Management. Canada based Alter NRG Corp produced the plasma gasifier for Tees Valley 1 (TV1).

The job of transporting more than 100 abnormal loads to site during construction of the plant was undertaken by UK heavy transport company GCS Johnson. The pieces of cargo were shipped to the UK, sailed up the river Tees, and then unloaded on the North bank near the Transporter bridge.

The largest components came in through the North bank and had to be transported along more than three miles of narrow roads, public roads and a temporary road that lead to the North Tees Chemical complex.

In total, it took around six months to plan the transport route, including carrying out engineering calculations and stability checks. Ground work included relocating main power and relocating street furniture and infrastructure to provide sufficient clearance at ground level. A new road was also laid along with new curb stones and replacement gates to allow the loads to pass.

Cargo that was transported included a pair of silos that weighed 30 tonnes and measured 22.9 metres long. The plasma gassifer had a net weight of 202 tonnes and stood 9.7 m tall, towering a row of houses that it passed by at the start of the move.

To move the gassifer, GCS Johnson used a Titan heavy haulage tractor and trailer. Due to the high centre of gravity, they travelled at quite a sedate pace delivering all components to site without incident. The gassifier and silos where moved in early May, while large duct sections were moved in August 2014.

At the beginning of September a convoy of abnormal loads, the like of which has not been seen in the UK for many years, travelled down the road to site together. Average heights for the transport were 12.5 m and each weighed around 50 tonnes. Once again steady progress was made from quay side to construction site for these over sized loads. All transport convoys were accompanied by police escort.

With all the components delivered to the site on schedule and without any problems the facility is due to start processing waste shortly.