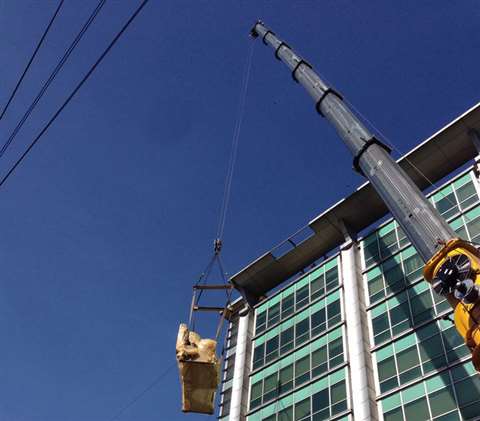 A Grove GMK5220 all-terrain crane was used to remove an old, inefficient air-conditioning system from an 11-story building at the Far Eastern University in the Philippines’ capital city Manila and replace it with a new one.

AsiaE was the logistics and delivery contractor, while Ravago, which is a multi-discipline industrial company, supplied the crane from its large rental fleet.

AsiaE calculated that the installation of the new aircon system would require three lifts, each of 14 tonnes, to install the chiller plus another lift to position the 3 tonnes of additional accessories, all of which would be lifted to the top of the building.

After consulting with Ravago, AsiaE decided that the Grove GMK5220 would be the best crane to handle the work.

The five-axle Grove GMK5220 has a 220 tonne maximum capacity and a 68 metre main boom. Reach can be extended to up to 108 m by adding jib attachments. The crane is also relatively narrow (3 m wide).

However, the roads surrounding the building were so narrow that even though the GMK5220 was compact enough to access the lift site, in order to extend its outriggers, AsiaE had to get special permission from the local council to dismantle some barriers.

The crane operator set the lifting parameters in accordance with the engineering plans and the three lifting points for the chiller and accessories were set.

Each lift was completed and all went to plan, with no damage to any surrounding object despite the highly congested working area. Although seven hours were initially allocated for the work, in the end the whole project was wrapped up in just four hours.

Michael Macatangay, sales manager for mobile cranes at Manitowoc’s Philippines office, said, “This was a great job for the Grove GMK5220 and a really good showcase for its capabilities,” he said. “It was able to maneuver into a tight spot between buildings, set up, and then place a series of heavy loads on top of an 11 story building. By the day’s end, the crane was back at Ravago’s yard and ready to go to its next job.”