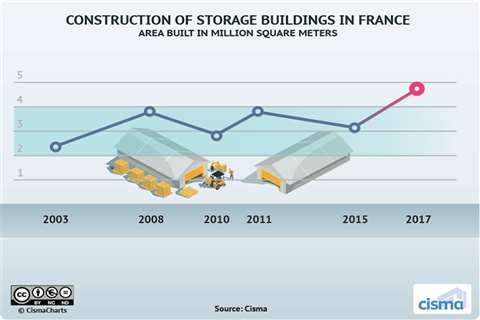 A graph showing the rate of storage construction in France

New storage construction performed strongly last year with a rate of growth of +23%, meaning that a record 4.7 million m² have been built last year in France.

2017 was a strong year for the French logistics market, which hit a record level. For the first time, new storage construction (warehouses, cold storages, silo buildings and other specialised buildings) exceeded 4 million m².

Economic growth, the diversification of occupiers’ needs, new challenges posed by e-commerce and the streamlining of supply chains of large retailers have prompted some occupiers to opt for new platforms, often on a large scale.

Consequently, the ten biggest deals in 2017 alone accounted for over 20% of overall take-up.

The rate of growth is expected to slow down in 2018 but it is predicted that the market will continue to grow, driven by the flexible manufacturing trend and increasing e-trade.