Guay pairs up for kiln lift 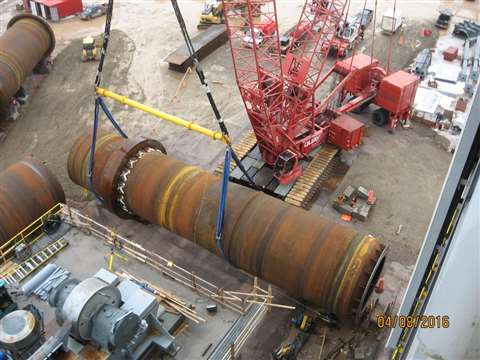 Canadian crane rental and specialized transport company Guay chose a pair of lattice boom crawler cranes with spreader beams for a project to install a six-section clinker kiln in Québec.

Lifting operations were carried out in early spring but equipment still had to withstand extreme weather on the Canadian coast, including heavy snowfall. Lift planning had to account for the changes in conditions and constantly evolving jobsite environment.

This important industrial project is scheduled for completion later in 2016. McInnis said that it will be a “model of environmental performance”, meeting the highest standards.

The six pieces were assembled in pairs at ground level before the resulting sections were lifted and assembled in three subsequent lifts. Two were lifted using the 16000 fitted with a Max-er attachment that allows the crane to lift more at a longer radius. The 2250 lifted the other pair. Lifting operations concluded with a tandem lift using both cranes to align the three sections in their final positions.

Rafael Palomar, team leader in Guay’s technical department, said, “Our scope of work for the project covered all lifting-related requirements, including selection of cranes and rigging equipment, ground preparations and logistics, in addition to lift co-ordination and supervision. Given the demands of the project combined with the weather, selecting suitable, durable equipment was essential to delivering our commitment to the landmark project.”

Palomar explained that the Modulift beams were chosen because of their capacity and span plus the ease with which length could be adjusted onsite. To lift the sections to their final positions at the right angle, rigging equipment had to be adjusted according to the centres of gravity, as calculated during the planning stages.