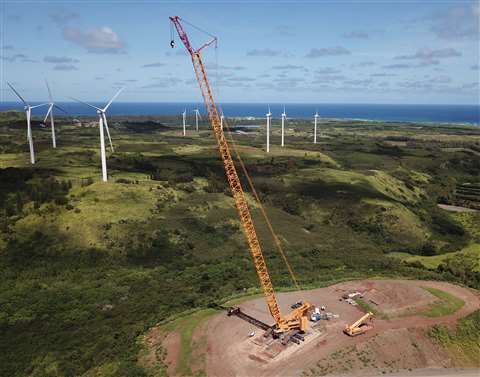 The LR 1100 started work on the island in October 2019 and is scheduled to remain there until the end of December. Liebherr claimed it is the largest crawler crane to have ever worked on the island. It is being used to erect eight Vestas V-136 wind turbines.

The LR 11000 is set up in SL3F configuration with a main jib of 108 metres and a fixed tip of 12 metres, providing a maximum load capacity of 173 tonnes. The wind turbines’ hubs weigh around 100 tonnes and are being lifted up to a height of 105 metres.

When equipped with 90 tonnes of central ballast and a slewing platform ballast of 250 tonnes, the crane can be used without a derrick. Liebherr said this was an important criterion for Bigge when selecting the right crane for the job. This is because the wind farm is in hilly terrain and the crane has to be frequently moved and occasionally converted. This can be done more quickly and easily without a derrick, Liebherr explained. Buckner also has auxiliary cranes on site, including a Liebherr LR 1350/1 crawler crane. 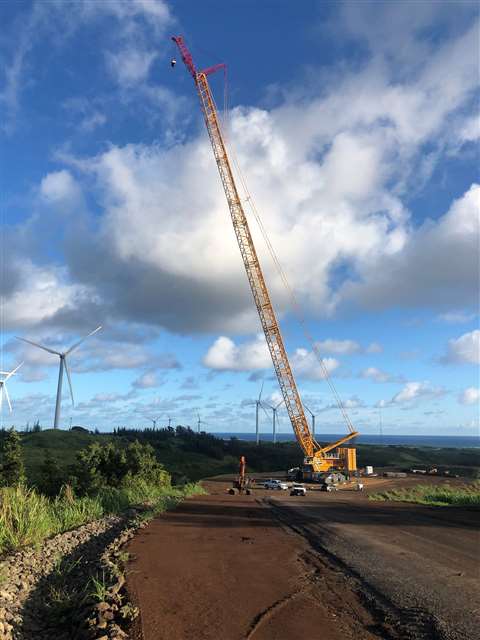 The supply of spare parts could potentially have been a challenge due to the island’s location so far from the USA mainland. This has not been an issue, however, as Kevin C. Long, director sales at Buckner, explained, “Our construction site is supplied from the new Liebherr warehouse in Lodi, California, but for safety’s sake we also have various tools and spare parts available locally for this job. So far, however, we have managed to do entirely without spare parts and erection engineers.”

The crane driver for Buckner in Hawaii is Burkhardt Hartinger from Germany. “The offer to work in Hawaii was very tempting,” said Hartinger. “And I also have a little free time to explore the island after work.” 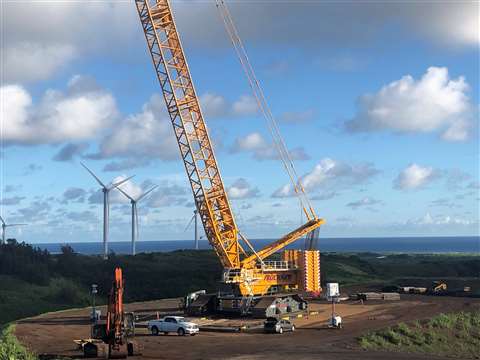 The crane is being operated by Burkhardt Hartinger from Germany