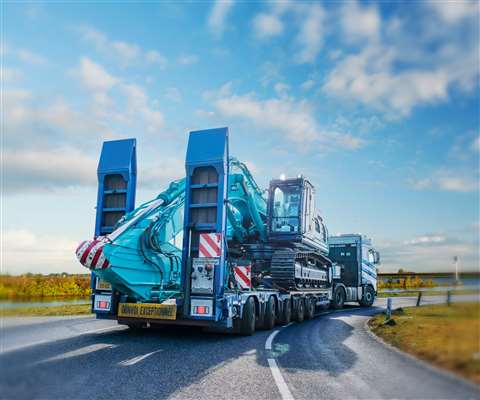 Nooteboom has developed heavy duty ramps for its Manoovr range of machinery trailers. Machines weighing 80 tonnes cane be loaded using the ramps, each of which can carry a wheel load of 20 tonnes, the Dutch manufacturer said. The new ramps get their first public airing at the Intermat construction equipment exhibition in Paris, France, from 23 to 28 April 2018.

In the Netherlands an MPL-97-06(VU), 6-axle extendible Manoovr semi low-loader trailer can carry 75.5 tonnes at 80 km/h so the new ramps allow full use of that capacity. The design of the end of the ramps gives a slope of ten degrees to make loading and unloading easier.

Also available are heavy duty hydraulic landing legs which can be mounted underneath the rear of the trailer. They have a capacity of 30 tonnes each, giving a total of 60 tonnes. The most recent additions to the Manoovr range with application for the new ramps are four-, five- and six-axle extendible models with excavator trough.

The Nooteboom stand at the Intermat show is E5 F 011.