In 2017, a joint venture (JV) between Korean construction group Daelim, Turkish construction conglomerate Limak, Korean infrastructure developer SK E&C, and Turkish construction contractor Yapi Merkezi, (abbreviated to DLSY), won the contract to design, build and operate the Çanakkale 1915 suspension bridge. Once complete the bridge will span the Dardanelles strait in Turkey, which forms part of the continental boundary between Europe and Asia. It will be the world’s longest span suspension bridge and will carry a six-lane motorway – part of the US$ 2.8 billion Kınalı-Balıkesir motorway project. 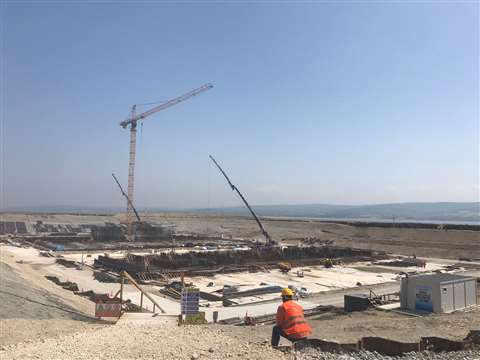 When complete, the1915 Çanakkale Bridge in Turkey will be the world’s longest span suspension bridge

According to Marr Contracting, it plans to use its 330 tonne capacity Favelle Favco M2480D heavy lift luffer in order to decrease the construction time and associated risk for the project.

Marr Contracting started work on engineering plans for the project in January 2018 and expects to be on site from July 2019 for an estimated 14 months. It will be responsible for: designing the crane supports and ties; supplying the supports ties and cranes; installing and commissioning the cranes; climbing and operating the cranes during the construction of the bridge towers; and dismantling of the cranes on completion of the build.

Marr Contracting managing director, Simon Marr, said, “This is an exciting project for us – not just in engineering terms but emotionally and culturally as well. Gallipoli holds a unique place in the heart and psyche of both the Australian and Turkish people, and for us to work alongside Turkish engineers and construction teams on building this significant legacy project is a once-in-a-lifetime opportunity. We are delighted to be selected to undertake this demanding package of work.”