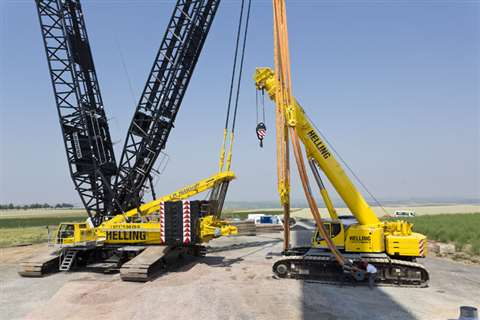 Markus Helling, Helling managing director, worked with experts from Liebherr to develop the concept. Using the LTR 1220 as counterweight has a number of advantages, as Markus Helling explained, “I can save on eight transport units for the ballast, which is only required for the set-up process but not for the hoisting work in between – in other words for erecting and lowering the LR 1600/2 and each time it is moved.”

The concept was used during the erection of a Senvion wind turbine at a wind farm near the Rhine-Hesse town of Alzey. The turbine had a hub height of 128 metres.

Helling uses the LR 1600/2 to hoist the top steel tower sections onto prefabricated concrete towers and then to hoist the turbine sections. After assembling the rotor and completing the system on the previous day, the team from Helling started preparations to lower the crawler crane's lattice boom.

The boom included a 12 m fixed jib and had an overall length of 150 m. After dismantling the central ballast on the LR 1600/2, the LTR 1220 was moved behind the LR 1600/2 and positioned for use as counter-ballast. The LTR 1220 was then suspended on the derrick boom and was docked to the pulley head using an adapter on the rear of the 600 tonne LR 1600/2, a spokesperson said.

It normally takes three and a half to four days to move the LR 1600/2 to the next site if the crawler crane has to be dismantled, transported and then erected again, a company spokesperson said. Using the LTR 1220 as a relocation aid, however, helped save Helling a large amount of time.