EXERGY International, a leader in the design and production of turbines for Organic Rankine Cycle (ORC) with a supply base of more than 400 MWe installed, introduced new developments to its radial outflow turbines for ORC and other applications.  Roberta Prandi reports.

Radial outflow turbines (ROT) have been developed at the beginning of the 20th century, where they have been used during the era of steam-powered ships and locomotives.

This has mostly been in Sweden and the UK by Svenska Turbinfabriks AB Ljungström in Finspång and Parsons Marine Steam Turbine Company at Wallsend in North East England respectively.

These have only declined in popularity when steam turbines have been replaced by different prime movers, particularly diesel and gas turbine engines.

In the power generation business, the decline of the steam ROT has been influenced mostly by the increasing in size of power plants often beyond the capability allowed by this configuration.

Despite the decline of the radial outflow turbine in steam power plants and mechanical drive applications, this design maintain notable features and in particular the high efficiency.

This is the key characteristic that has been considered by EXERGY International for the development of its ORC turbine product range, moreover in ORC applications, ROT does not have the same power limitation affecting the water steam units.

ROTs can properly accomplish the large volumetric flow ratio, thanks to the inherent increase of passage area along the flow path that limits the flaring angle without significant increase in meridional flow component.

The EXERGY design, while using a similar architecture of its predecessors, includes a more advanced design and layout with replaceable, cartridge-type, mechanical group. The mechanical group is an assembly that contain bearings and shaft seal, allowing to carry on maintenance and inspections with minimal downtime. 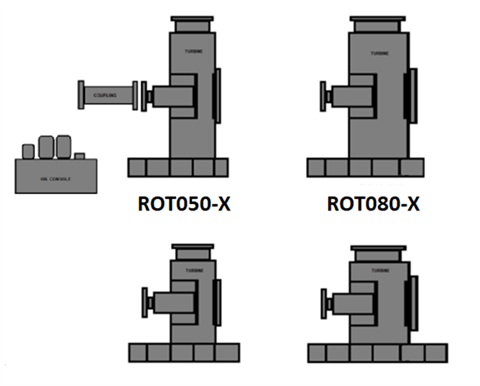 Exergy radial outflow product enhancement
Despite developing the ORC radial outflow turbine many years ago, EXERGY’s portfolio is constantly under development to improve performances and to enlarge the product range from the typical ORC market toward broader and innovative applications.

For this purpose a standardized series of units has been recently defined to cope with different applications, with a broad volumetric flow range both for low-speed and high-speed solutions.

EXERGY International, whose headquarters are in Italy, explained that the standardized series is based on similarity laws where scaling factors have been selected, following a Renard geometrical series.

The similarity among different sizes helps to predict the behaviour of each turbine in terms of gas dynamic efficiency, rotor dynamics and aeromechanics. The impact of parameters that cannot be scaled – such as Reynolds number, roughness, thicknesses, clearances, fillet radiuses, has been assessed and suitable corrections have been introduced.

The standardization allows to achieve a volumetric flow from 2,000 to 800.000 ACMH, a power range from 500 kW to 35 MW and turbine enthalpy drop up to 350 kJ/kg. The general design of the turbine complies with EN standards and upon request with customer specification (i.e. API).

Aside from standardization activities, Exergy constantly improves the turbine performances using state-of-the-art engineering tools and collaborations with experts and universities.

The already high efficiency of the ROT architecture is further optimized by an aero-thermodynamic design that makes use of standard profiles, optimized on purpose with computational fluid dynamics (CFD) tools. Transient multistage CFD analysis can be performed also by a third party to have an independent assessment of the performances without the need of an expensive test.

Another feature of the ROT is the low rotor stresses that result from the turbine specific geometry, as well from the low tip speed that can be selected considering the large number of stages that are stacked up within a small volume.

The low stresses are very useful for intermittent applications when the turbine rotor is subjected to many start up cycles or when a quick ramp-up to speed is required. Frequent starts and intermittent loading are leading to low cycle fatigue that in turn can influence either the design of the unit or its life.

Thanks to its specific features, EXERGY ROTs can be successfully used in several applications, among which:

In general ROT configuration can fit well in all the applications where high efficiency and a compact overhung configuration is required and clearly when dealing with high molecular weight fluids.

Standardization and product development makes it possible to expand this turbine technology, both in high efficiency ORC solutions as well as in broader markets, wherever efficiency and energy saving is a key parameter. The standardization activities on ROT is instrumental for the development of other EXERGY turbomachinery designs, as for example compressors, supporting the needs of TICA Thermal group.