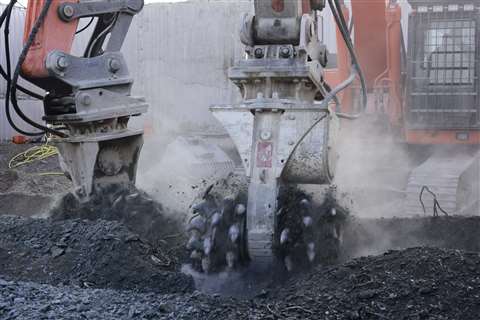 Erkat ER1500 and ER2000 drum cutters on the demolition site in Hamburg, Germany

Two Erkat transverse drum cutters mounted on Doosan tracked excavators have been lifted onto the roof of an aboveground Second World War bunker in Hamburg, Germany, to start demolition works.

A 220 t mobile crane was used to lift the equipment onto the high-rise bunker, where contractor Abbruch und Verwertungsgesellschaft Nord carried out a specially developed demolition process.

Described as gentle and selective, the process employed the Erkat ER1500 and ER2000 models, which according Erkat, are known for their low vibration and quiet operation.

Erkat drum cutters, which can demolish around 3 cu m (106 cu ft) of reinforced concrete per hour, consumed around 30 units a day during the top down demolition.

Erkat said the models, which are equipped with a Quicksnap safety mechanism to enable easy pick changes and cutting heads with replaceable wear parts, were well suited for the tricky demolition.

The German bunkers were originally constructed in the 1940s in response to air-raids by Allied Forces. More than 1,000 were built in Hamburg alone and while most were constructed underground or in discreet locations, around 50 aboveground bunkers still dominate the cityscape. These are slowly being demolished to create new living space. 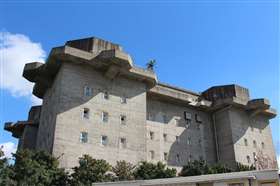 An example of the Second World War aboveground bunkers in Hamburg, Germany