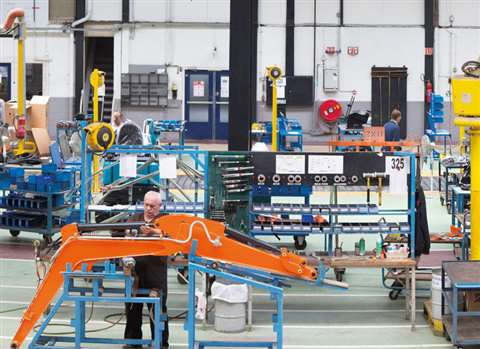 Hitachi's Oosterhout factory in the Netherlands

Hitachi Construction Machinery (Europe) – HCME – is restructuring its Dutch factories in Oosterhout and Amsterdam, with the changes scheduled to be completed by April 2018.

The company said that this would improve its operational efficiency and competitive supply chain.

The current Oosterhout factory will focus its entire operation on mini and compact excavators, ranging from 1 to 8 tonne capacity. Hitachi said its market share in this segment had risen in recent years, and that the restructure would help to meet growing demand by increasing production by more than 50%.

Hitachi will also set up a new distribution centre, which together with the Oosterhout factory will serve as a hub for the delivery of mini and compact excavators.

HCME said that its customers would benefit from considerably shorter delivery times as a result of the Kanban production process – a lean manufacturing system aimed at improving overall production efficiency.

Several investments have been made at the Oosterhout factory in recent years, which are said to have improved its overall efficiency and quality standards. Consolidating the production of mini and compact excavators at this location will support the company’s goal of supplying competitive products under more flexible conditions, said HCME.

HCME said it was confident that there would be no compulsory redundancies and that any permanent staff affected by the restructure would be redeployed elsewhere within the company.

HCME’s director of production and procurement, Kazutoshi Yoshioka, said, “The main objective of the factory restructure is to increase production efficiency and performance in response to growing demand. This is one of the many steps we are taking as a world-leading construction machinery supplier that continuously strives to meet its customers’ needs.

“I am confident that our competitive position in the market will be enhanced as a result, so that we can continue to be relied upon as a trusted business partner by our customers.”