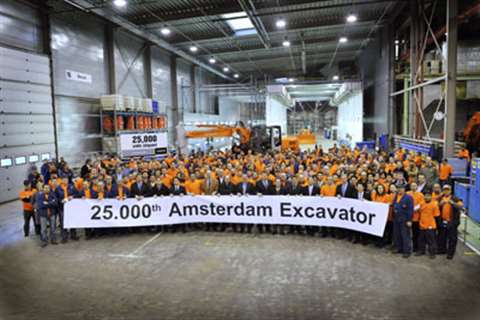 Hitachi has been manufacturing excavators at its Amsterdam factory since January 2003, following the dissolution of the Fiat-Hitachi joint venture with CNH. It hit the milestone of 5000 excavators in December 2004 and surpassed 10000 machines in May 2006. The factory was extended in 2006 with the addition of a new € 22 million, 19600 m2 production plant to take capacity from 3500 to 6000 machines per year.

Jos Luyckx of Hitachi's earthmoving equipment dealership in Belgium, Firma Luyckx, said, "Over the years, DMVH has ordered apporximately 130 Hitachi machines, 72 of which are still in use today. Its fleet includes crawler excavators from 8 to 35 tonnes, wheeled excavators, material handling machines and wheeled loaders."