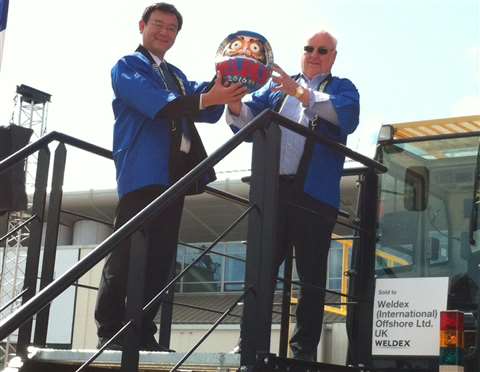 Dougie McGilvray, Weldex CEO and founder, said, "We bought our first Hitachi Sumitomo cranes back in 1989, six of them, and now we are rebuilding our fleet with eight new machines from the company. As well as two units of the SCX 3500-3, we also have six 80 tonne models on order to be with us by October this year. I look forward to a long and successful relatrionship with Hitachi Sumitomo."

As part of the handover, instead of a key there was a painted head - named a daruma - in the colours of the Scottish flag and with the company's name across it. This was received by McGilvray aboard his new crane. The Weldex team, members of the Hitachi Sumitomo team and UK distributor NRC also used ceremonial hammers to break open a barrel of sake and shared this with the crowd.