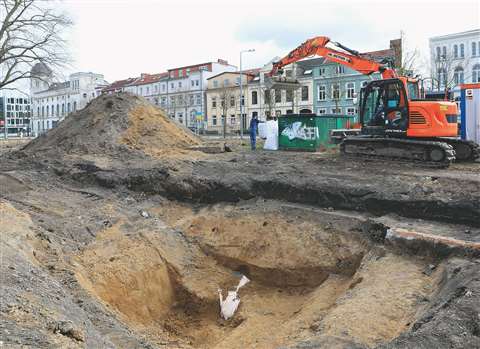 The device was uncovered during exploratory work on a building site at Rostock’s Rose Garden. Rostock was the target of many air raids during the war and so thorough ordnance investigations must be carried out before each construction project in the area.

For the excavation of the 250kg explosive, MAKS relied on two 12 tonne crawler excavators from HKL’s rental park. The machines were equipped according to the DGUV Information 201-027 (formerly BGI 833) Guideline for Risk Assessment and Definition of Protective Measures for the Disposal of Weapons. HKL’s Centre in Neubrandenburg, which specialises in the retrofitting of construction machinery for DIN-standard ordnance work, fitted the two Doosan DX140 excavators with special safety glazing to protect the operators in the event of an explosion.

Ludwig Dede, Operations Manager HKL Center Neubrandenburg, said, “We’ve been working with MAKS for ten years and know what matters when it comes to clearance.”