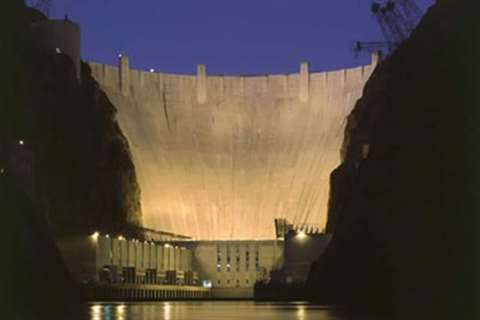 September 30 saw the 75th anniversary of the official dedication of the Hoover Dam in the US. The ceremony in 1935 was presided over by president Franklin Roosevelt on completion of the dam, although the powerhouse would not be completed until the following year.

The Hoover dam was built between 1931 and 1936 on the Colorado River's Black Canyon, which marks the border between the US states of Arizona and Colorado. The concrete arch gravity dam is 379 m long along its crest and 222 m high, with a radius of curvature of 152 m. Constructing it required the placing of some 2.45 million m3 of concrete and an estimated 15000 people worked on the scheme.

It was built by a consortium called Six Companies Inc at a cost of US$ 49 million - equivalent to about US$ 2.6 billion in today's money. The consortium comprised contractors from across the western US - Utah Construction Company, Morrison-Knudsen, Pacific Bridge, J.F. Shea, MacDonald & Kahn, Bechtel and Henry J. Kaiser - the latter two being considered a single company for the purposes of the consortium. The project was managed for the US government by the Bureau of Reclamation.

According to Bechtel, working on the dam was a turning point for the company. "There's no question that it was a stepping stone for us, said Stephen Bechtel Jnr, who headed the company from 1960 to 1990. "The Hoover Dam project and our role in it was a major platform for advancing on to bigger projects since then."

In 1999 the Hoover dam was voted fifth in a global list of the top 10 construction achievements of the 20th century by a vast international audience of global construction magazine readers in a survey run in conjunction with that year's ConExpo exhibition. It was praised alongside such schemes as the Channel Tunnel, Golden Gate Bridge, US interstate highway system, Empire State Building, Panama Canal, Sydney Opera House, High Aswan Dam, World Trade Center twin towers and Chek Lap Kok Airport.