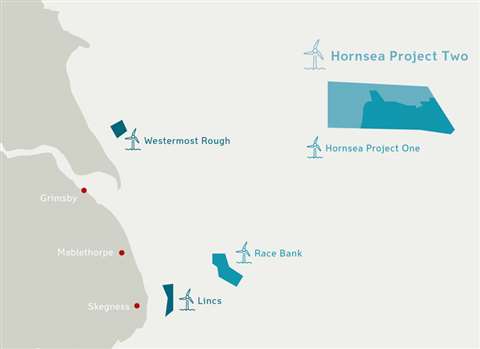 Development consent for the UK’s Hornsea Project Two offshore wind farm has been granted by the Secretary of State for Energy.

The wind farm – located 89km off the east coast of the UK – will have a capacity of up to 1.8GW and will consist of up to 300 turbines.

The project is owned by Danish-based Dong Energy and is being developed by SMartWind.

Phase two will include the construction of the turbines, foundations, offshore and onshore substations, array cables and export cables.

In May, planning consultation for Hornsea Project Three was started by Dong Energy, while the company announced in February it would build Hornsea Project One, which it said would be fully commissioned in 2020.

He added that a project of this size would help in its efforts to continue reducing the cost of electricity from offshore wind, while it also showed the company’s commitment to investing in the UK.

Meanwhile, Huub den Rooijen, director of energy, minerals and infrastructure at The Crown Estate, a UK-based property development company which was created by Act of Parliament, said, “Offshore wind is already on course to meet 10% of the UK’s electricity demand by 2020. Major developments of Hornsea Project Two’s scale will pave the way for its continued growth alongside driving down costs, creating high value jobs, and supporting the UK’s transition to a low carbon energy supply.”