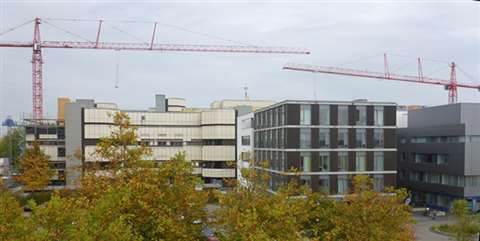 The renovation of the Klinikum Ingolstadt is a job for the XXL cranes in the Wolff Pack. Together, the 9025.20 Wolff and Wolff 8540.20 with their respective 90 and 100 meter long jibs easily cover the

The Wolff 9025.20 Cross and the Wolff 8540.20 Cross were used to add a new floor to the hospital building. The cranes were required to add the floor without interrupting the hospital’s day-to-day business, a company spokesperson said.

Ulrich Langenbein, Wolffkran sales manager for Germany, said, “The assembly of the two Wolff cranes using a 500 tonne mobile crane proved to be very challenging and had to be optimally co-ordinated with the hospital’s daily business. The delivery of the mobile crane and Wolff crane components as well as their pre-assembly on the ground and the set-up of the eight by eight metre cross frame all had to be meticulously co-ordinated to not interfere with the hospital’s daily routine.”

To keep the emergency area at the front of the hospital clear from obstruction, the Wolff cranes were erected on the narrow sides of the building. To cover the 160 metre complex, the Wolff 9025.20 was configured with a 90 m jib with tip load capacity of 2.5 tonnes, and the 8540.20 was fitted with a 100 m jib with 3.7 tonne load capacity at jib end. To safely slew above each other, the cranes were placed on towers of 37 and 46 m, respectively.

The job was completed in four months.