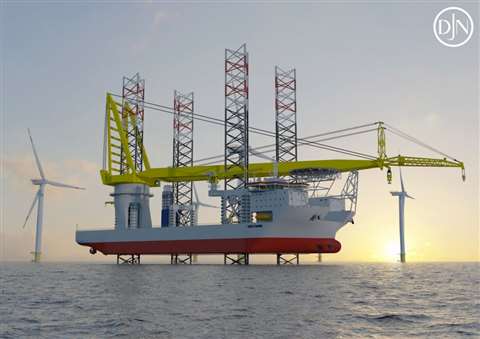 Jan de Nul’s under construction Voltaire jack-up vessel will be the largest of its kind, with a lifting capacity of 3,000 tonnes

The Luxembourg-based company’s vessel, with a lifting capacity of over 3,000 tonnes, will stand taller than the Eiffel tower and is set to be the largest of its kind in the world.

Voltaire is expected to be launched in 2022, from the Cosco shipyard in Qidong, China; it will then make for the Dogger Bank project, located some 125km off the UK’s northeast coast.

The vessel’s duties will include transporting and installing Dogger Bank’s 107m blades on the world’s largest Halliade-X turbines, built by General Electric (GE).

The wind farm, being developed jointly by SSE Renewables and Equinor, will be constructed in three elements, between 2020 and 2026, and is expected to generate 3.6GW when completed – enough to power 4.5 million homes and equating to approximately 5% of the UK’s energy needs.

Philippe Hutse, offshore director at Jan De Nul group, said, “We are delighted to be selected as the transport and installation contractor for the next generation of turbines at Dogger Bank. The size of this giant project coincides perfectly with the capacities of our jack-up vessel Voltaire.