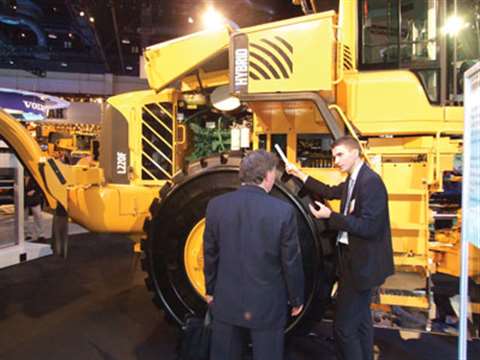 Arvid Rinaldo explains the hybrid concept to a ConExpo visitor.

While the industry is used to seeing new machines at construction equipment exhibitions, it is rare that a truly revolutionary product is launched. However, last month's ConExpo-Con/Agg show in Las Vegas, US saw a major leap, with Volvo Construction Equipment unveiling the first construction machine in the world to feature a hybrid drive.

As well as a standard 260 kW Volvo D 12 diesel engine, the L220F loader on show featured an electric motor in the drive train. This improves fuel efficiency by powering the machine at low revs, where traditional diesel engines are inefficient. At higher speeds the diesel engine is used to recharge the electrical system's batteries.

Project manager Arvid Rinaldo told CE, "We launched our first wheeled loader back in 1954, and since then we've been focusing on engineering - trying to figure out how the customer can get the most out of every drop of fuel. This is our next revolution on wheeled loaders."

Volvo says its patent-pending system, which it calls an Integrated Starter Generator (ISG) system reduces fuel consumption by -10%. In addition it offers another 50kW of power on top of the diesel engine for higher overall productivity.

As well as handling parts of the driving and loading cycle, the ISG powers several auxiliary systems, such as in-cab climate control. This means that even when the loader's diesel engine is not running these systems stay on. As well as helping operator comfort, Mr Rinaldo says this design feature has huge implications when the machine is idling.

"In many wheeled loader applications, the machine can spend 40% of its time idling. When this machine idles, the diesel engine shuts down, but you can still run climate control and listen to the stereo for up to one hour on from the battery. As soon as the operator hits the throttle, the machine will start up in less than a second. We have 67 hp (50 kW) starting the engine, so it just flies off," he said.

Volvo hopes to make its first hybrid models available in 2009. According to Mr Rinaldo, by this time more features are likely to have been added to boost performance and fuel savings.

"On the model we have at ConExpo, the battery is charged when the diesel engine is working at its optimum range. For the model that will be sold to customers in 2009, we are looking at regenerative braking - the battery will be charged under braking as well," he said.

By keeping the standard diesel engine in the hybrid L220F, the addition of an electrical motor means the machine is generally more powerful. Mr Rinaldo said, "When you drive into a pile, you sometimes need extra force. With this system you can do that at lower revs, so you're putting less strain on the engine."

He added, "Because of that improved operability, the machine will be perceived as easier to drive."

According to Mr Rinaldo, the L220F will be the first in a series of construction machines from Volvo to feature hybrid drives. "This machine will be out at the end of 2009, and we see this machine as the first step in our hybrid programme. We have a lot of other things going on that we're not quite ready to talk about yet," he said.

According to Mr Rinaldo, there was strong interest in the L220F at ConExpo. As a small piece of anecdotal evidence to support this, out of more than 100 news stories posted on CE's ConExpo Daily electronic newsletter throughout the course of the show, the piece on this revolutionary new product received the highest number of hits. In fact it was viewed more than +25% more times than the second-placed story.