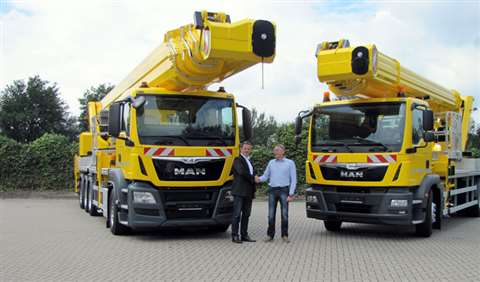 The Netherlands-based company has invested in Height Performance Steiger T 480 and T 720 truck mounts after adding its first Ruthmann machine to its fleet, a Steiger T 540, in 2013.

The T 720 ordered by Kamphuis is equipped with hybrid power. It features an additional battery pack/electric motor, the manufacturer’s HYBRIDpower system fulfils customer demands for environmentally-friendly machines and economical alternatives when it comes to propulsion. It saves fuel because the vehicle’s engine can be operated by battery during boom movements. Wear and tear on the engine is also saved because the vehicle does not have to be started up or shut down as often.

Should the vehicle’s engine malfunction during operation - with the boom off the ground – the HYBRIDpower system also serves as a practical emergency backup motor, said the manufacturer.