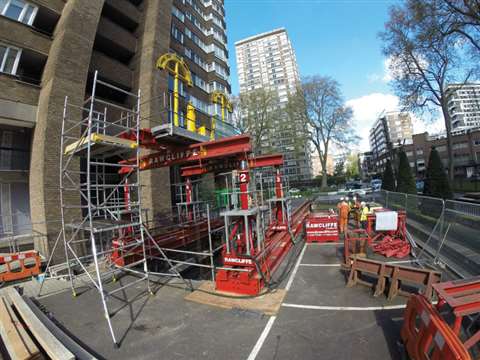 Hydraulic gantries are capable of fitting into most spaces and offer end users a flexible lifting solution. To work effectively, they are placed on skid tracks to provide a means for moving and placing heavy loads, often with only one pick.

The selection of projects below include the use of a number of hydraulic gantries, including the new Enerpac SL400 gantry, which has a capacity of 215 to 440 US ton (195 to 399 tonnes) tonnes and a lifting height of 3.16 to 9.1 m. Projects also include units from Rigging Gear Sales and Lift Systems and lifting service provider Vanguard.

BLIS Logistics (BLIS) was contracted by NSW railway (Railcorp) Australia to replace a bridge on Parramatta road in Sydney. In total there are four bridges over Parramatta road, two that were built in 1920 and two that were added in 1985. BLIS was hired to replace the oldest two bridges, which weighed 70 tonnes each. The bridges were to be replaced with a new steel frame base bridge that weighed 70 tonnes and concrete decking blocks that weighed 10 tonnes each. In total, the new bridge, complete with decking and hand rails in place, was 165 tonnes.

The original proposal for the job was to replace the bridge using a 750 tonne capacity mobile crane. This, however, would have required road closures, turning off the power and removing the overhead lines to give the crane space to move. To save time and money, BLIS proposed to use its 400 tonne capacity four point lift system to lift each bridge section out of the head stock by 1.7 m and roll them out from under the overhead wires.

To remove the old bridges, one of the 1985 built bridges was moved to the side. Challenges at the site included a dip in the road under the bridge, so this had to be ‘built up’ to ensure the jacks were level. In addition, the main gas line to Sydney was also under the road, so additional mats were used during lifting to spread the weight of the load.

Brian Lay, BLIS Logistics, said, “We set up the jacks on the road under the bridge to lift from both sides of the road and lift at heights between 4.5 and 6.3 metres. We then had to roll each bridge out by 17 m to a 450 tonne crane [from crane service provider Boom Logistics] set on one side of the road. Once outside of the overhead rail wire the crane lifted and slewed to a truck parked on the other side of the road. Once all three bridges were out the crane then placed the new 70 tonne frame on top of the jacks. The crane was then used to place the 10 tonne decking on the bridge as well. The lift system then lifted the bridge and rolled it back in and lowered it into place within 3 mm.

“Because the jacks were on both sides of the road and one set of jacks was 8 m behind each other we needed to control the speed to make them work in symmetry. We did this with hydraulic and electrical hook ups. We lifted the jack heads and turned them to face each other so that they could hold a head beam. We also put a second set of clamps in place on top of the head beam to the bridge and used a laser to control the lift height. Because each bridge had a different centre of gravity, we weighed each lift one month before.”

JB Rawcliffe & Sons helped remove an old transformer and reinstall a new one at the Hyde Park substation in central London, UK, using a range of hydraulic equipment. The old transformer weighed 40 tonnes and measured 5.3 x 2.7 x 3.8 metres, while the new transformer weighed 27 tonnes and measured 5.1 x 2.5 x 2.9 m. The transformers were 8 m below ground level, creating access restrictions. To lift and replace the transformers JB Rawcliffe used a hydraulic lifting gantr system, with strand jacks on top, bridging mats, modular axles and road plates. Before the lifts were carried out, 3D calculations, swept path analysis and finally a test rig was completed. The hydraulic lift system was built around the opening with special bridging mats for additional ground support. The strand jack frame was preassembled ready for operation and to reduce rigging time on site, Stuart Rawcliffe, JB Rawcliffe & Sons, said. “The redundant transformer was lifted from its operating position 8 m below ground level and loaded directly to transport in one simple and safe operation,” a JB Rawcliffe spokesperson said. The replacement transformer was then lifted into position using the same method.

Vanguard was sub-contracted to provide storage, transportation and installation of the equipment by international energy group GDF Suez. An 800 tonne capacity hydraulic lift system was used to load the cargo from self-propelled modular trailers onto multi–axle trailers ready for transportation.

At the Avon site, Vanguard used a 500 tonne capacity Power Tower to install equipment, including a 230 tonne gas turbine. The Power Tower is fitted with large work platforms and double-acting cylinders, capable of lifting 450 tonnes to more than 8 metres high when used in a four-point configuration. It has a load capacity of 360 tonnes at a lifting height 10.6 m. In addition, the Power Tower system has a self-contained Wedgelock safety mechanism, which mechanically locks at any time during the lifting operation and, should there be any failure of the hydraulics, the spring activated mechanism is designed to lock the boom in place. Electronic sensors on the power packs notify the operator when the Wedgelock is engaged.

Dale Huddy, Vanguard project manager, said, “The on-site lifting and moving solution included lining up each generator with its foundations but, this time, from the opposite side of the site – then followed by the turbine. We then lifted the transformer off the trailer and lowered it onto jack-and-slide rails, slid it across in between the foundations, lifted it with the 500 tonne Power Tower, and carried it forward onto its final resting place.”

The first stage of the project included dismantling the existing hydraulic double action press which was on a second floor mezzanine. To remove the press from the building, it needed to be dismantled, lifted, lowered and transported to the ground floor. The old press weighed 30 tonnes.

To carry out the task, JH Kemp used an Enerpac SL400 hydraulic gantry to off load and transport the new press horizontally through the bay doors. Once inside, the press was lifted to a vertical position. Two gantry units were then moved to the second floor mezzanine and re-shackled to the press.

Nick Kemp, JH Kemp director, said, “In selecting the gantry solution, we wanted to go with the most modern type of system. The Enerpac SL400 hydraulic gantry was more advanced than many standard systems we have used. It offered several advanced features such as the wireless remote control which allowed us to read the height of each gantry leg as well as the weight of the object being lifted.”