Hydraulic crane maker Hyva has a new range of 40 models, from 9 to 66 tonne-metres. 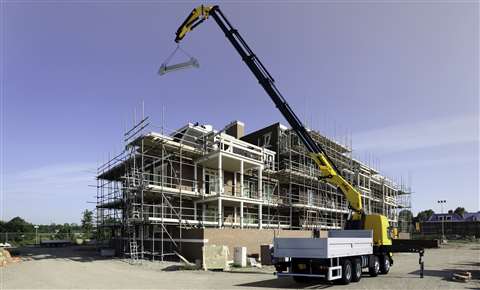 Hyva has launched its new Edge series of 40 models

First sight of this new series is at the Bauma exhibition in Munich, Germany, 8 to 14 April 2019.

The new Edge series models offer five boom configurations. Telescopic models are the HT series, while HB denotes basic articulated models, and HC series models have a double linkage. The HC-K models have a short retractive secondary boom to lift heavy loads close in to the column. Another configuration available is continuous slewing and as many as eight extensions can be specified, depending on model.

The Magic Touch feature is an automatic folding and unfolding function for transport and working positions. Another is the Dynamic Load Diagram which calculates capacity available according to the truck’s stability.

Hyva offers an extended warranty of three years overall and, specifically on structural elements, it is five years.