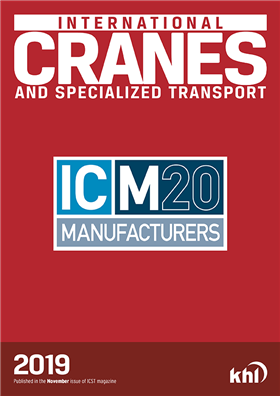 Any rise in the total of the top 20 largest crane manufacturers by revenue is a very welcome sight.

This year it is a particularly impressive double digit increase of 12.5 per cent, or just over US$3 billion. Allowing for exchange rate fluctuation it is basically an increase across the board for all 20 companies - all of which also appeared in last year’s ICm20 table.

This year’s total for the crane-related revenue of all 20 companies was $27.851 billion, up from $24.832 billion in 2018’s table. While the vast majority of the increase is from the Chinese manufacturers, all the others are also up, many of them with double digit rises.

The extraordinary rises in percentage terms are from China’s XCMG, Zoomlion, and Sany. In their reporting currency the rises are 48, 83 and 78 %, respectively. In terms of actual amounts they have been sufficient to significantly disrupt the table. It is the second year of big increases among the Chinese manufacturers, largely due to a return to growth in their domestic market.