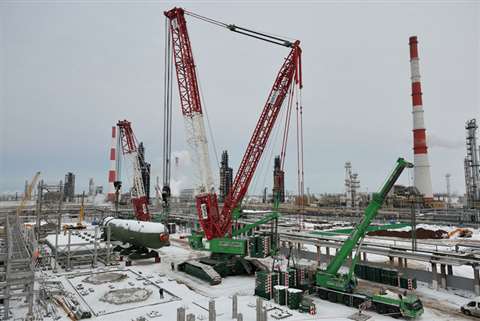 This year’s increase of 7 % in the total IC50 Index for the top 100 companies is more in line with the 5 % increase figures from 2012 and 2011, making last year’s double digit rise somewhat of an anomaly. Overall, the turnaround continues and the trend remains upwards.

One thing that hasn’t changed is that Mammoet retains its place in the number one spot. Its IC index is up by nearly 7 %, despite having fewer units than last year. That indicates the continued move to higher capacity units. Also notable is that Mammoet’s lead over Sarens in second place is way smaller than it was last year, at 157,466 points, more than 60 % down on the 421,928 point difference in 2013. Sarens has increased its IC Index by 13 % and broken through the 2 million points mark. Many readers will have noticed a proliferation of new cranes in Sarens colours at the major exhibitions around the world.

In the rest of top ten, there is just one change in the order from last year. All Erection and Maxim have switched, with the former taking 5th place from the latter. All Erection’s Index is up just over 11 % while Maxim’s increase was just over 4 %, enough to make the change.

Just outside the top ten, the UK’s largest crawler crane rental company, Weldex, is up one place to 11, Deep South is up one to 12, reflecting fleet expansion, and Sarilar from Turkey is also up, from 14 to 13. Down three, from 14 to 11 is Essex Rental, with a fleet reduction of nearly 88,000 points, or just over 20 %.

One of the biggest climbers this year is Netherlands-based Hovago Cranes, up an impressive ten places to 18, with more than a 50 % increase in its IC Index to way over the 200,000-mark. New high capacity crawler cranes joining the fleet have been a major contributor.

As might be expected, the strong rise in energy related work means that companies working in the USA are showing big increases. The acquisitive TNT Crane & Rigging is one, up six places from a 30 % higher Index. Last year it made 24 places. A major investor in its fleet is Entrec, which, as a result is up six places and nearly 30 %. Despite having fewer units in the fleet, Buckner at 17 moves up two places on the back of a 15 % rise in its IC Index, due in part to the addition of Liebherr’s 1,000 tonne capacity LR 11000 crawler.

Also busy in the energy sector in the USA is Crane Rental Corporation, up five places to 46. Mountain Crane Service, at 68, is up from 82 last year and has 11 new depots as well as more cranes of both types. Guay and AmQuip both made up two places, as did Allegiance Crane & Equipment. Further down the table Southwest Industrial Rigging gains five places and moves into the top 100 at 96.

Companies moving out of the top 100 are Hewden, Kelley Equipment, Agiris, Tecmaco Integral and Afcons Infrastructure.

Elsewhere in the world, positive activity is found in Asia where a big climber is Chu Kai Public Company in Thailand, just outside the top 100 at 101, up from 119. Hokazono from Japan is up two places to 97 as rebuilding work continues after the earthquake. From Israel, a 17 place rise for Avi Cranes can be attributed to expansion in the fleet of large crawler cranes. Italy-headquartered Fagioli, a leader in the super heavy lifting and transport world, is up a strong 10 places to just outside the top 50, in 51st place.

The 2014 total for the full IC50 is 216 companies (with space for the top 123 of them in the magazine). In 2013 there were 213. Highest in the ranking of the seven new or returning entries this year is SOP&G from Russia, at 39. Next is Chubu Kogyo from Japan, at 69, followed by Antar Cranes Services from Singapore at 77 and then BKL Baukran logistik from Germany at 119. Allstate Crane Rental is new in at 162, and then Transportes Noroccidental from Ecuador at 166, and Roman Servicios from Argentina joins at 175. That leaves four entries removed for reasons of consolidation by acquisition, insolvency, and or lack of data.

As understanding and acceptance of the tonne-metre rating system works its way through the system, a small number of companies, as in previous years, have majorly different IC Index figures from the year before as a result of adjustment in the calculation to better reflect the capability of the fleet. Most of the companies are outside the top 100 and the transition is almost complete.

Look out for a 2014 IC50 special report available at: www.khl.com

For the full table of all completed entries click here.

NOTES FOR IC50
Companies are ranked by their IC Index, calculated as the total maximum load moment rating, in tonne-metres, of all cranes in a fleet. All companies in the list, plus other prospective ones, have the opportunity to supply fleet information and other data for inclusion in the ranking. Where companies supply the full data the figure used is calculated by them. In some cases, where no data is submitted, or is incomplete, we have based a company’s equipment fleet figure on IC estimates. In cases of insolvency, acquisition or lack of information, companies are withdrawn from the table.

While we make great effort to ensure the accuracy of information provided, it cannot be guaranteed and IC accepts no liability for inaccuracies or omissions.

The IC50 Index will next be updated in the first quarter of 2015. If you think your company should be included please contact IC for an application form. Note that tower cranes are not in the main IC50 table here as they will appear separately in the special IC Tower Index in the September issue of IC. Similarly, specialized transport equipment is also in a separate ranking, the IC Transport50, in the August issue of the magazine.

WORLD CRANE REPORT
The World Crane Report is a global analysis of fleets, trends, financials and economic fundamentals. This 72 page KHL Executive Report is the most comprehensive of its kind ever produced for the global crane sector. Broadly split into two sections, it looks at both the long-term trends for crane owners as well as those for crane manufacturers. It explores the links between the industry and the broad economic picture, providing new insights into how fundamentals such as GDP growth impact on crane manufacturers, buyers and end users.

The World Crane Report also includes unprecedented analysis of the global crane fleet – its total size (number of cranes), their capabilities (load moment and lifting capacities) and the changing preferences for crawler versus wheeled mobile cranes. These trends and others are plotted over a ten-year timescale, with analysis not only discussing obvious changes in the industry – the move towards higher and higher capacity cranes among the world’s largest rental companies, for example – but also analysing regional differences between Europe and North America.

For further details on the World Crane Report see: www.khl-infostore.com/world-crane-report