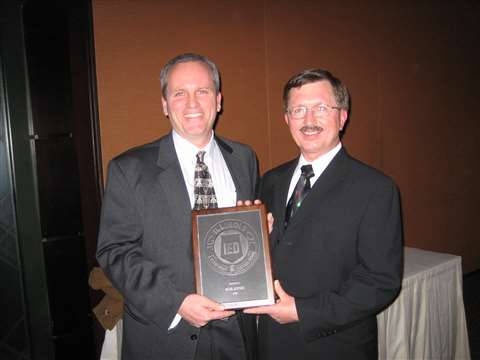 Metrolift's president, Rick Dahl (left), has been appointed as the Illinois Equipment Distributors president for 2009.

Rick Dahl, president and CEO of Chicago-based rental company Metrolift, Inc., has been appointed president of the Illinois Equipment Distributors (IED) for 2009.

Dahl previously served as the IED'svice president in 2008 and secretary in 2007. He has been a part of the aerial lift business for 21 years, serving 16 under Metrolift.

"I am looking forward to serving as IED president this year," Dahl said. "Our theme for IED this year is awareness. We want to keep all our members informed about environmental, political and IT opportunities in 2009."

Dahl will work with IED officers Jim Cox, who will be vice president and is currently from Casey Equipment; Steve Dillon who will serve as treasurer and is with West Side Tractor Sales Co.; Hugh Goulding, from E TIP, Inc., will be executive secretary; first-year director will be S.E.S's Bob Jones; Mark Harbaugh of Ditch Witch Midwest will serve as second-year director; and Construction Equipment Guide's Joe McKeon will serve as associate director.

"We have a really great team this year," Dahl said. "We are here to help facilitate more growth for IED and its members."