In with the anchors 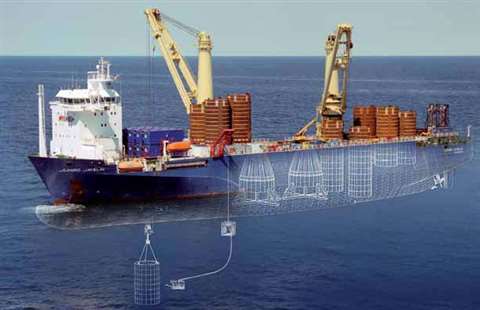 Consideration for the environment is driving a growing demand for clean fuels which is generating work for lifting and transport companies. As an example, Jumbo Offshore and Norway’s APL took up the challenge to install two submerged turret loading (STL) buoys for a new deepwater gas delivery project offshore Boston, US. In less than 40 days the Jumbo Javelin installed 16 suction anchors, including the world’s largest to date, laid 8 km of anchor chain and prepared two 150 tonne STL buoys. Boston energy consumers are one source richer.

To meet the growing demand for gas in the region, Excelerate Energy is constructing the Northeast Gateway Energy Bridge some 18 miles offshore Boston for local energy supply interests.

The project foresees LNG shuttles shipping back and forth to source, and re-gasifying the LNG into the local Boston grid. The specially designed LNG carriers will dock on one of the two APL submerged turret offloading buoys, which will connect via flexible risers to a subsea pipeline system.

The STL buoys will be permanently anchored offshore and, when no vessel is attached, will float some 30 metres below the surface. On arrival at site for offloading, the LNG carrier will pull one of the STL buoys into a conical shaped opening in its keel. A secure connection will then be made after which the re-gasification process will commence and the LNG (returned to its gaseous state) is fed into the local gas distribution grid.

Each 156 tonne STL buoy is held in place by eight mooring lines consisting of a chain segment (attached to the suction anchor) and a 170 m length of spiral strand wire (SSW) attached to the STL buoy.

In January 2007 Jumbo Offshore signed an agreement with APL under which Jumbo Offshore and APL would jointly execute the installation of the two APL STL buoys and associated moorings using the DP2 heavy lift vessel Jumbo Javelin.

The agreement covered transport of most project materials from Europe to North America, installation of the 16 mooring legs and preparation and over-boarding of the two APL STL buoys for subsequent connection to the mooring system by an anchor handling tug.

With the exception of the suction anchors, which were shipped directly from China to the local staging post of Saint John, New Brunswick, all project materials were marshalled by APL in Rotterdam for transport to site aboard Jumbo Javelin.

Jumbo Javelin arrived in Rotterdam for general project preparation and loading of project materials. With a gypsy winch installed above the hold and a chain chute to guide the chain over the vessel’s side, the 8,000 m of 134 mm anchor chain (total weight some 3,000 tonnes) was loaded onto one section of the tank top and the tween deck. Subsequently, the vessel’s pair of 900 tonne capacity cranes were used to load the eight reels of spiral strand wire and the two STL buoys. With its large hold, the Jumbo Javelin could easily accommodate these project materials with room to spare and keeping the weather deck fully free for cargo.

Jumbo Javelin arrived in Saint John, New Brunswick, where the six largest suction anchors were loaded onto the main deck and sea-fastened in the vertical for transport to site.

The anchor chain was routed out of the hold, up and over the gypsy winch, over the side of the vessel and then back onto deck. Connection of the chain to the suction anchor was achieved through use of a platform hung off from strong points located on the side of the anchor. Using this procedure meant that the 250 kg pin could be safely handled and inserted to make the connection between the anchor chain and the pad eye on the anchor.

Lifting and over-boarding of the anchor was done in a single lift operation. The speed of the heavy lift mast cranes made the over-boarding of even the largest anchors a very quick and efficient operation. While lowering through the splash zone, a Cranemaster passive heave compensation system was used to compensate for excessive dynamic loads and motions.

On touchdown of the suction anchor, initial penetration was about 1 m due to the anchor’s own weight. Again the Cranemaster was used to compensate for the vessel’s motion relative to the stationary anchor. Final penetration was achieved by means of an ROV and suction pump. Once the anchor was landed on the seabed the ROV docked the pump suction head onto the suction flange. With the suction pump activated, pressure inside the pile drops and the external hydrostatic pressure forces the suction anchor further into the seabed. Suction anchor embedding took between 6 and 20 hours, depending on anchor size and local bottom soil condition.

Once the designed penetration had been achieved, the anchor chain was laid in the relevant lay corridor. This operation was repeated for all 16 anchors. The size and number of the anchors meant that two trips were needed.

Prior to over-boarding each buoy, one end of each of the eight spiral strand wires had to be attached to the turret underneath the buoy and the other end hung-off from a spreader beam.

By means of a powered reel drive, each SSW was reeled off via a chute overboard and hung-off underneath an outrigger structure to the starboard side at one end. The other end of each SSW was connected to one of two spreader frames one of which was hung-off at the aft end and one at the fore end of the vessel. Once all eight spiral strand wires had been suspended under the outriggers, one of the vessel’s 900 tonne cranes was used to move the 156 tonne STL buoy from its transit location onto the outrigger structure. Tugger winches were then used to pull each socket upwards and into a position where the spelter socket connection with the turret could be made-up.

With all eight sockets connected, the buoys were handed over to waiting tugs for connection to the previously installed anchor chains and suction anchors.