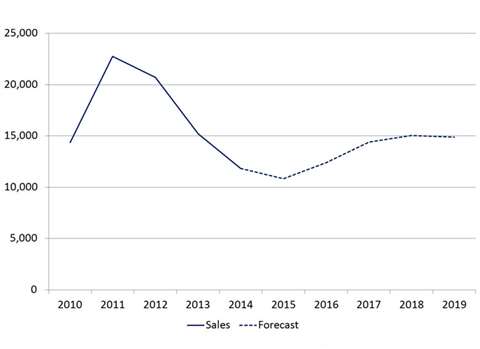 The Indonesian construction equipment market is on a path to sustained recovery, following three years of sharp declines, according to specialist market intelligence company Off-Highway Research. This is one of the findings of a new Multi-Client Study, published following an extensive in-country research programme.

According to the company, construction equipment sales reached an unprecedented peak of 22,700 units in 2011, fuelled by a dramatic surge in global commodity prices.

However, in the second half of 2012 demand for all types of heavy equipment began to falter, largely as a result of the collapse in global commodity prices, particularly coal but also crude palm oil. Other issues, including the 2014 ban on the export of raw materials saw the new equipment market fall to 11,800 units that year.

However, Off-Highway Research said there was mood of optimism among construction equipment suppliers that the market would return to growth in 2016.

This is partly based on the public infrastructure investment plans of president Joko Widodo, who took office in October last year. This happened as the Indonesian planning ministry, Bappenas, undertook a two-year systematic assessment of the country’s infrastructure needs.

It estimates that 2,650 km of roads, 1,000 km of toll roads, 15 airports, 24 seaports, 3,258 km of railway network and 35 GW of power plants are needed to bring Indonesia up to international benchmarks suitable for a middle-income country. This represents an investment need of IDR 5,500 trillion (US$ 442 billion) over the next five years, double the entire 2015 state budget.

Off-Highway Research said it is expected that several of the planned major infrastructure projects will now get underway in the second half of 2015 or early 2016. The company expects this to lift demand for new construction equipment back to around 15,000 units per year by 2018.