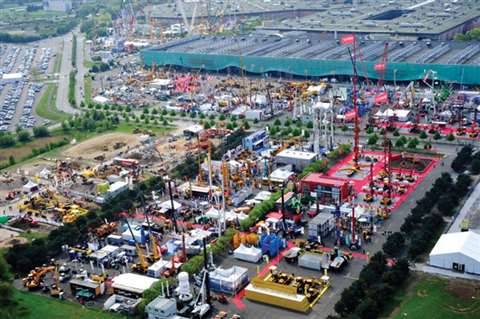 April 2015 sees the global construction equipment industry migrate to France for the Intermat exhibition. IC previews the show prior to publishing our main show guide in the March issue of International Cranes and Specialized Transport

Three years have flown by since the 2012 Intermat and this year’s event, the largest construction equipment exhibition in 2015, is approaching fast. From 20 to 25 April at the Paris-Nord Villepinte site in France this, the 10th edition of the show, will occupy 375,000 square metres, accommodating 1,350 exhibitors and around 200,000 visitors.

The organiser reported that 238 new brands have registered for the show. Other big names at the exhibition include Atlas, Goldhofer, Kobelco, Liebherr, Scheuerle, Sennebogen, Terex and Zoomlion.

For the 2015 Intermat, a new exhibition layout has been introduced. In addition to using the new Hall 7, the show will also occupy the outside demonstration areas together with halls 5A, 5B and 6; instead of halls 3 and 4.

Visitors from the crane industry will have plenty to see, including a new tower crane elevator from Liebherr. The 200 kg capacity LiUP is mounted inside the tower crane mast or, for smaller cranes, on the outside. It allows the operator to ascend and descend tower cranes with current and older mast systems instead of having to climb ladders to reach the operating cabin. Also on show from Liebherr will be the 172 EC-B 8 Litronic flat-top crane.

Kranlyft will display a range of Maeda Mini Cranes, including the new MK1033CW-1 and the updated MC285C-2.

This is just a first glimpse at some of the equipment that will be on show at Intermat 2015. Look out for the full show guide in the March issue.

The ESTA Dinner and Awards at Intermat
On 23 April, during the Intermat exhibition in Paris, France, will be the ESTA Awards of Excellence evening, organised by KHL Group on behalf of the European Association of Abnormal Road Transport and Mobile Cranes. It brings together the leading crane and heavy transport industry professionals in Europe.

The annual ESTA Users Night Awards evening in 2015 will be at the Hilton Charles De Gaulle. As in previous years, the jury’s results for the ESTA Awards will be announced and the awards presented to the winners in the various categories. ESTA may also present the Gino Koster Award as a lifetime achievement award to a person who has dedicated significant time and effort to the industry and achieved remarkable results that have helped the industry to grow and develop.

There will be opportunities to meet and network with fellow professionals throughout the evening and after the dinner. The evening includes a hosted drinks reception

Intermat at a glance

Where: Paris-Nord Villepinte, Paris, France. The exhibition centre is 30 minutes north of Paris by public transport (RER line B) and five minutes from Paris-CDG airport.