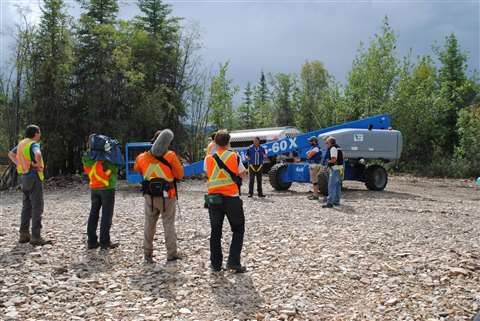 Discovery Channel's series "Gold Rush," which airs Friday nights at 9PM ET/PT, follows a group of men who, in the grip of the current economic recession, attempt to strike it rich mining for gold. Todd Hoffman of Sandy, OR, along with his father, Jack, lead their fellow miners in a search to reclaim the American dream.

"The Genie brand is well known in the TV industry and I personally have used various models on other series in the past," said Browne. "On both sides of the Atlantic, Genie has become the watchword for aerial platforms and has enviable brand recognition in the industry."

In this season of "Gold Rush," taking place just outside Dawson City in the Yukon Territory of Canada, the crew needed the assistance of a Genie product and also required training for proper operation of the boom.

"Ronan contacted us because the show needed a boom to help clean their gold washing station," said Samora. "But a Genie S-60X telescopic boom lift could also be used for their filming purposes. The boom would allow them to get close to their wash plant when the paydirt was being filtered while also providing an excellent elevated platform for filming. The Yukon is a perfect hostile environment to highlight the S-60X's full capabilities."

"Given the rough terrain, extremely remote location and demands of filming a' fly on the wall' documentary series, we knew we would need an extremely durable, robust piece of equipment," said Browne. "The S-60X gave us the flexibility to carry a cameraman, sounds recordist and director along with their kit. Its off road capability was crucial for moving around safely and efficiently on a working gold mine."

After negotiating a deal with McPherson Rentals, the boom arrived safely at the site. Samora and Terex AWP Training Manager, Scott Owyen, traveled for two days from Redmond, WA to the remote location in the Yukon.

The boom was initially intended to be used in two main ways. First, as a straight aerial platform for establishing high and wide shots of the claim. This would give the audience a sense of geography - a substitution for prohibitively expensive helicopter shots. The second intended use was for the miners to be able to work on their washplant safely without having to shut it down. However, as the series progressed, the capabilities of the machine went from being used on a weekly basis to a daily one. The operation of the machine was so smooth that they were capable of utilizing it as a moving shooting platform, Terex AWP said.

"Our Director of Photography was able to achieve some stunning 'reveal' shots where the camera is panned upwards on the moving platform," said Browne. "It was also unexpectedly rugged and capable for off road applications. The harsh conditions here initially worried us but we soon realized that the machine could reach the muddy and steep areas of the gold claim safely and quickly."

Many members of the crew were familiar with booms and how they operate. However, it was found to be beneficial to have a "hands-on" trainer from Terex AWP come and run through the operation of the machine.

"We spent an afternoon in a classroom setting learning all about safe use and the mechanics of the machine," said Browne. "Following this we had a hands-on practical session where the selected trainees were shown how to fully utilize the machine's entire range of capabilities. Even experienced users found this training incredibly beneficial and it contributed to having zero down time on the machine in almost 100 hours of operation in extremely challenging conditions."

With all of the operators fully confident in the machine's abilities, the team was able to maximize the machine's potential in a safe and timely fashion.

"This was a win all the way around," said Owyen. "The modern day miners really carry the entrepreneurial spirit. The belief in themselves is refreshing. I was impressed with how much hard work they were putting in - this was definitely not a Hollywood set. These were real people, real work and real hearts of gold. I'm glad we were able to be a part of it."