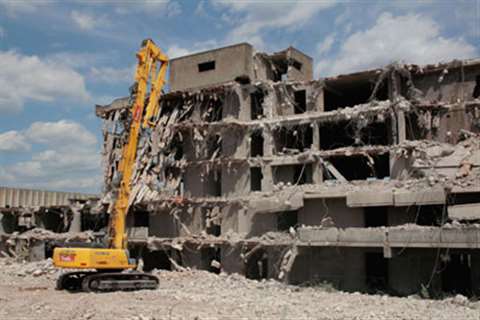 The first New Holland E485B Demolition high reach to be supplied into Italy has been working on the demolition of a building complex at via Selva Candida in the outskirts of Rome. Built at a cost of several billion Lira, the complex was originally intended to become the headquarters of Italian national airline Alitalia, but was never actually completed and has now been brought down.

The largest structure on site, a 35 m (115 ft) high building with a total volume of 40,000 cubic metres (440,000 cubic feet) was brought down using explosives in June this year by explosives specialist Saig, based in Parma. The remainder of the structures were demolished using mechanical techniques by Rome based contractor Trulli Special Demolitions, who operates a fleet of 13 excavators, including the new E485B with its working height of 24 m. A total of 320,000 cubic metres (3,450,000 cubic feet) of demolition debris resulted, the bulk of which was heavily reinforced concrete. Demolition work was completed by the end of July.