Jacqueline O' Donovan - Inside looking out

Jacqueline O’Donovan grew up in a family rooted in demolition and recycling – but admits it was never her first choice of career.

However, for anyone who might think this suggests an early desire to flee the nest, or an individual uncomfortable with an industry widely seen as male-dominated, a wake up call soon follows.

“The business was always part of my life,” she says.

Jacqueline O’Donovan, managing director: “I’m responsible for 160 jobs and when that’s the case your view is different than if you’re an employee”

“It was part of my life even when I was too young to work in it properly. When I was at school I had to come down and help clean the offices. I loved it, but I was a tomboy in those days and I wanted to be a mechanic.”

As the tomboy phase passed – “I discovered heels and the Doctor Martens had to go” – so did the yearning to tinker under car bonnets.

And, while still in her teenage years, Jacqueline made O’Donovan Waste Disposal the focal point of her business life, but under circumstances she could barely have thought possible, and certainly in a manner she would never have wished.

Her father, who had come to the United Kingdom to set up the business, died in his early 50s, and it was down to his four children – two sons and two daughters – to take the firm forward. Jacqueline became managing director.

That was 30 years ago, and to this day Jacqueline can remember how she felt approaching the new role.

“I knew nothing,” is how she sums it up.

“And I never had the luxury of people around me with any past experience. We were all new, we were learning it together. My sister Caroline went off to have her daughter, who is now 28, so she was missing for around 12 to 18 months, and it was just me and my brothers, Michael and Anthony.“

For someone who knew “nothing”, she has proved a fast and consistent learner. Barely an awards ceremony goes by these days without either O’Donovan as a collective or – as has happened five times – Jacqueline as an individual scooping up a prize.

The awards just keep on coming. Most Inspiring Business Woman at the Best Business Women awards. Outstanding Woman in Construction. Achiever of the Year at Construction Excellence in London and the South East.

But their frequency has done nothing to lessen Jacqueline’s surprise at her success, and the award of Vitalise Business Woman of the Year in September 2016 took her feelings to another level altogether.

“I was absolutely chuffed. I didn’t expect to win so many awards, and Business Woman of the Year was an even bigger shock. I was up against someone with an OBE, someone from British Airways, someone else who was in IT security, but it was a unanimous vote, which was fantastic.

“I’ve also been asked to sit on a couple of judging panels. It’s nice to be recognised.”

As its name suggests, O’Donovan Waste Disposal has a higher profile in recycling than in demolition, but demolition has always been there and Jacqueline has retained a fondness for it that goes back years.

“I absolutely love demolition, and I have done since the early days.

“We do demolition ourselves, on a very small scale – two-storey houses, garages. The biggest thing we have done is a 10-storey block of flats. We service demolition contractors as well, help them bring industry standards up.

“But I would say that the demolition industry needs to embrace young people, otherwise we are going to get inexperienced people knocking things down and modular buildings going up in their place. And it could do with being more integrated with logistics and waste as a whole.”

Looking out for the next generation is something of a theme with Jacqueline. She is passionate about making cycling in cities safer and the company’s drivers go through a safe urban driving course that involves half a day on a bicycle in traffic. She is also a qualified trainer and does all the company’s training herself.

“I can’t see the point of bringing someone in from outside who doesn’t know what challenges are facing our staff, and we have had a lot of success,” says Jacqueline.

“We have put waste pickers through National Vocational Qualifications in waste management, and they have been able to get qualifications they never thought they would.

“There are people who have been here 15 years, and we invest in them.

“If you take our first aid training for example, it’s not just for the two people who will be the actual first aiders, it’s open to all who want to go on it.”

For such a natural communicator, it’s ironic that Jacqueline says the big decisions in her working life can often be arrived at with no one else, or at the most a small number of people, involved. 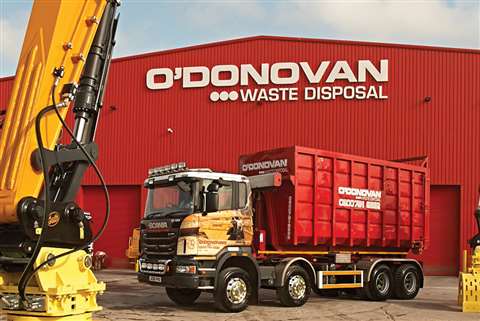 The Alperton building, a US$25 million investment

“I’m Libran. I weigh up my options, think things through, look at the risks, the hurdles, the benefits. That’s the female coming out in me. I’ve never really been one to bounce things off others.”

The biggest recent decision, however, the £15 million (US$ 18.5 million) move to a new waste disposal facility in Alperton,  west London in 2016, was far more instinctive.

“I knew the minute Alperton came up that strategically and financially it was the best thing to do. It was a must, a no-brainer.

“We had been leasing a site in north London which we could have paid for four times over, while the Alperton site has doubled in value in less than a year.”

But in a business as volatile as demolition and recycling, it has never been plain sailing.

The company has known tough times as well.

“Whenever you go through a recession, every pound is a prisoner,” says Jacqueline.

“I signed off all the stationery, everything went second class post, and those little things mounted up. People were looking at me as if to say ‘are you for real’?

“But ultimately I’m responsible for 160 jobs and your view is different than it would be if you were an employee.”

*Originally published in the March-April 2017 issue of D&Ri. You can register to receive the magazine on a regular basis at www.khl.com/subscriptions