JCB cab project ahead of schedule 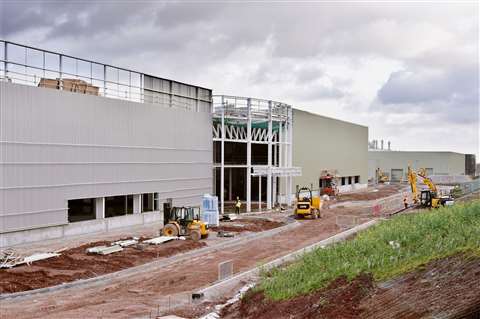 Work on the JCB Cab System factory is progressing

The shell of the 32,500m2 plant next to JCB Heavy Products and the World Parts Centre at Uttoxeter, Staffordshire, UK, is said to be on course to be completed slightly ahead of schedule ready for high-tech production line facilities to be installed from March onwards.

It is claimed that the investment, which JCB said was one of the biggest in the company’s history, would create the most advanced and productive cab facility in the world, with a computer-controlled production line, fully-automated painting facility and robotic welding.

The new site will accommodate 400 employees, who will relocate from nearby Rugeley.

JCB Cab Systems’ general manager, David Carver, said, “We are delighted with progress on the new site. A strong team focus on the delivery timeline and favourable weather means completion of the infrastructure and main building is ahead of schedule.”

Carver added, “A weld automation facility destined for the new factory is currently being trialled at Rugeley. In addition, a computer-controlled production line, fully-automated painting process and other high-tech features will ensure we have the most advanced cab facility in the world.

“A phased programme of moving production to the new site will be implemented from July onwards.”