According to the company, the range features industry-leading in its size class power-to-weight ratios, jaw opening sizes, cycle times and hydraulic efficiency. The attachment series, which debuts with the DXS-50 model, is ideal for demolition. 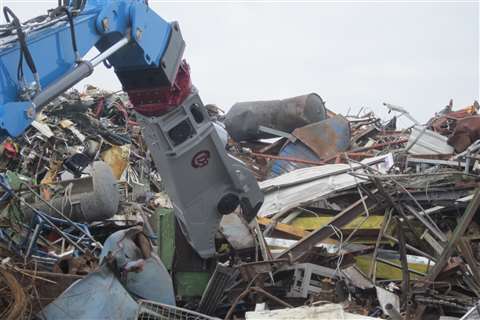 Kinshofer said the DXS-50 has the same size cylinder as shears in the same weight class, but with 20% more power

“Traditionally, more power means a larger cylinder, which results in a bigger, heavier shear and, often, a larger machine.

“The DXS-50 has the same-sized cylinder as shears in the same weight class, but with 20% more power, allowing our customers to achieve higher performance without investing in larger carriers.

“This saves them money up front while improving their ROI with the attachment’s production-boosting qualities.”

Kinshofer said its DemaPower cylinder technology gives the DXS-50 the same power as shears two sizes larger. The cylinder uses four chambers instead of the two found in other shears, resulting in 20 % more surface area within the cylinder.

The DXS-50’s high power-to-weight ratio means the attachment is suited for top-down demolition, both because contractors can use smaller carriers and because the attachment’s light weight and superior cylinder technology improve fuel efficiency while the excavator arm is fully extended. In addition, the company designed the attachment with a narrow frame to allow operators to better see their work.