German crane rental company Könning Autokrane has bought a Demag AC 160-5 all terrain crane from Terex Cranes. The 160 tonne capacity class crane has a 68 metre (223.1 ft) main boom and it will mainly be used for precast component assembly work.

“Before this, the AC 120 was the biggest Demag crane in our fleet,” said Könning Autokrane owner Marcel Könning. “That means that with our new AC 160-5, we’re moving up into a higher category that will enable us to take care of even more projects for our customers.”

Marcel Könning also said that, as much of his fleet are Demag cranes, he benefits from being able to share components. “A lot of spare parts and components are the same for a lot of models, meaning that we need to invest much less in inventory,” he said.

Könning Autokrane is based in Stadtlohn and provides a range of services in the Münster and Ruhr regions. In addition to all terrain cranes, its fleet comprises city cranes, mobile tower cranes, assembly cranes, truck-mounted cranes, and mini crawler cranes.

Marcel Könning picked up the crane in Zweibrücken together with his wife Elisabeth (marketing and control), and his daughter Verena Könning (junior manager). 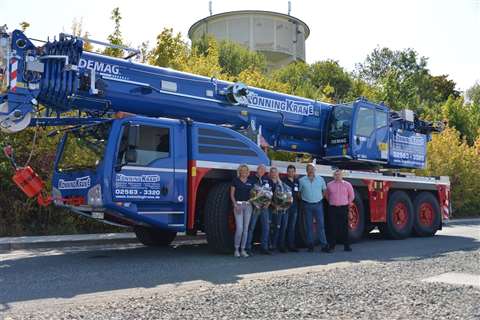