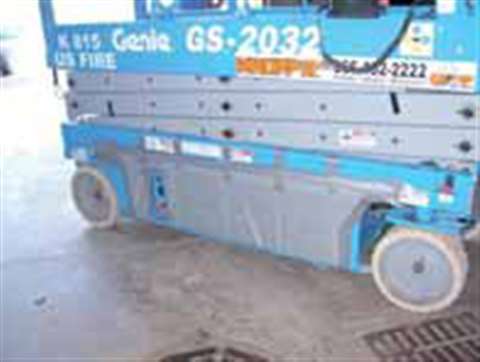 Kropp has asked Genie to now provide “environmentally friendly” hydraulic fluid for its machines. Kropp is a very large supporter of Genie products and spent roughly $14 million on the manufacturer's

“If you need a lift, either mentally or physically, call us,” says Al Kropp, president of Kropp Equipment Inc. These are pleasant words to hear during the holiday season and it's the professional slogan of a man who rides a helicopter to all of his four rental yard locations within Illinois, Indiana and Wisconsin.

This means of transportation may sound grandiose and quite Howard Hughes, but it's not that Kropp is a grandstander or eccentric; it's his way of trying to efficiently operate one of the Midwest's most successful independent rental yards. And besides, anyone that travels through Chicago during rush hour knows it's enough to ruin a good day.

Among its four locations (Schererville, IN where its corporate office is located, Streamwood, IL, South Beloit, IL and Waukesha, WI), the company currently has 1,200 units in its fleet valued at approximately $38 million. Proving the adage “what you give is what you get,” last year the company invested $14 million in equipment, and saw rental sales approximately the same figure. In 2006, the company invested $10 million in its fleet.

Since 1975, Kropp has been in the rental business, beginning with a handful of Grove cranes and a few forklifts. Fast forward 25 years, the company had less than 200 units in its fleet. Today, the company has 1,200 units with an average age of 18 months. What's the growth strategy here?

Apart from what seems to be the right approach to business management, serviceability and a large roster of customers in all aspects of the trades, the company has always worked hard to reduce labor for those that use Kropp equipment by offering innovative products. The faster Kropp Equipment can gets its customers off the job site, the more demand for its equipment seems to pile up. Kropp sees innovation as key to the company's success.

Among its achievements are its collaborations with manufacturers on equipment. Kropp offers a welding and generator system, and more.

“We've added track systems to our Genie booms. We were the first to have rough terrain scissors with welders and worked hand-in-hand with Skyjack to develop those,” Kropp says. The benefit is that the customer doesn't have to bring all these individual products to the job site, as Kropp offers an all-in-one package on its boom and scissors. “The contractor doesn't have the variables, he doesn't have three machines to start. Besides eliminating all the capital expenditures, we've also eliminated a lot of unnecessary time and tools and that has saved a number of industries a tremendous amount of money.”

The company has also tried to play its part jumping on the green bandwagon. Currently, Kropp is working with suppliers to only use environmentally safe fluids for its machine. The company learned a hard lesson when on a job site at Purdue University's campus in Indiana, a hose broke on one of its machines and 15 to 20 gallons of fluid dumped into the ground soil. This concerned the campus officials and although it was the customer that was operating the machine, the unit still had the company's name on it and Kropp was responsible for the clean up.

“We ended up bringing a clean up team with a backhoe and took the soil out and put new soil in. Needless to say, it became very expensive and shed a bad light on us as an equipment provider. From there we decided to take different measures,” says Kropp. One solution that Kropp cites was to actually put a “diaper” on the bottom of a machine in case it leaks to contain the oil. “But that's not the way to do it because you're just bandaging the problem.”

Kropp says this year Genie has guaranteed the company that it will provide fluids that are environmentally safe. And can the rental yard demand more for a machine that won't be a hazard if its hose breaks? Kropp says there's no immediate monetary benefit by offering something like this, but he does add that all of its customers are more comfortable with its machines than competitors. Kropp says that by mid March, all of its fleet will have this “environmentally safe” fluid.

The fact that Genie and Skyjack have entered into this relationship with Kropp seems to impress the president, as his fleet is mostly machines from these two companies. The company does try to keep an open mind with other suppliers, citing Genie and JLG as the “Cadillacs” of the industry. It has considered Haulotte Group, for example, the French manufacturer that is investing more time and money breaking the US market. It gave Kropp some trial units, and Kropp says he approached the equipment with an open mind, although he has so far resisted the temptation to add another supplier to its roster.

What machines are making the most money? The company says its bread-and-butter machines are the rough terrain 40 and 60 feet booms.

One part of the business the company is not too keen on is its retail. Although the company does sell off its older equipment (Kropp says its Internet postings of older machines works well for the company) he would rather focus on the rental portion. “Every time we sell a piece of equipment we lose a customer. We want to rent it. We put in 99% of our time renting equipment, 1% selling,” he says.

The company has also invested in its transportation fleet. It owns 12 tractor trailers. It recently bought two of Genie's trailers and an Up-N-Atom rollback. For each of its locations, the company has road service vehicles that are stocked with parts for its field tech mechanics. Most interesting though is the fact that the company only has four mechanics, one at each location. Kropp says that typically the standard for rental yards is that there is one mechanic for every 100 pieces of equipment. “Our fleet is all new that's why can run that many pieces of equipment with four mechanics.”

In regards to the competition, Kropp says the larger rental yards are closing up because of Kropp's success in the area. He says these outlets cannot compete with its service, response time, deliveries, and product. As other independents have reported to ALH, Kropp likewise has been approached to sell out. The company wants none of it.

Like most successful operations, Kropp has an extended business plan. Kropp will enter into a second generation with Al's son Kurt, who currently serves as the vice president of operations and executive vice president. This year, the company plans to “mature” and focus its endeavors on strengthening its office staff financially, legally, and professionally, he says. “We need to put a lot more time in those attributes which will pay off for us.”

He predicts this year also that Kropp will scale back on its investments down to around $4 to $5 million. Additionally, he wants to take the time to pursue new areas. He has four in mind: Lafayette, South Bend and Indianapolis, IN, respectively; and Madison, WI. He says the company will be convinced to enter these locations.

When the time comes

“I think we'll develop and grow into those areas and in 2009 make a move into one of them,” he says, who says it's the right time to open a new store when the company has a 50 to 60 customer base or that number of units in the marketplace. “We just don't throw a dart on the board. In most cases, we have customers taking us there,” he says.

Have equipment, will travel – who knows where Kropp Equipment will broaden to. But if it extends beyond its current greater Chicago boundaries, it might need to invest in a private jet.