Latin America: A region with challenges

A less favourable external environment in 2019 will have negative implications for Latin America, especially the deceleration in China’s growth, which will not only have an impact on demand, but also on commodity prices. Most Latin American economies cannot afford fiscal stimulus due to wide fiscal deficits, especially Brazil. 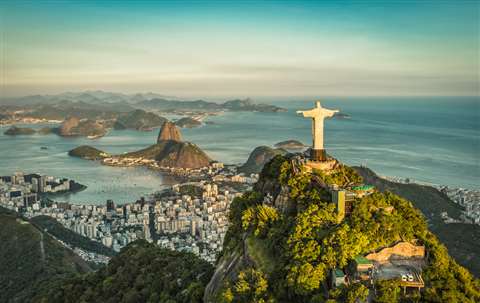 Brazil’s outlook is one of sluggish growth

Improvements in the labour market will help private consumption, although not to the extent of driving a sharp recovery. Further increases in commodity prices or external demand are unlikely to accelerate the expansion. Gross Domestic Product (GDP) growth in the region will be 1.5% in 2019, up from 0.7% in 2018, but still a modest rate for an emerging region.

Brazil’s economic outlook is clouded by political and policy uncertainties. Bolsonaro, the new President of Brazil, will soon have to deal with a sizable fiscal deficit fuelled by a growing shortfall in the nation’s pension system.

In principle his agenda is pro-business, but he may lack the ability to bring consensus and pass much needed reforms in Congress. We expect delays and changes to the already proposed pension and tax reforms, and this will delay investment projects. The outlook for Brazil is one of sluggish growth.

Although we forecast acceleration in 2019, we expect only mild pension reform and businesses will not be convinced that the country will see fiscal consolidation. It may take three to four years to bring the fiscal deficit to manageable levels (below 3% of GDP). Apart from pension reform, the government will have to implement fiscal reform to simplify the tax system.

Argentina is in recession, and the short-term outlook is bleak. The Macri government must implement severe fiscal and monetary retrenchment policies to regain confidence and reduce the country’s vulnerabilities and contagion risk. The administration has opted to implement tightening measures on monetary policy, along with an austere fiscal budget, as there is not much room to manoeuvre.

In addition to recession, Argentina has wide fiscal and external deficits with high inflation, an unstable currency susceptible to international contagion and growing debt. Freezing the monetary base will imply severe adjustment/decline in real terms in monetary aggregates as high inflation persists. This is an emergency measure that will reduce liquidity and means of payments, constraining economic activity. The monetary authority has also committed to no longer finance fiscal deficits.

Colombia, Peru, and Chile will see modest growth. Colombia will grow just 2.2–2.6% in the next three years; private consumption and investment will drive economic growth. The implementation of Colombia’s Fourth Generation (4G) infrastructure program should boost the economy.

Peru’s economic growth will be moderate in the short term as political noise causes disruption. For Chile, we anticipate weak growth to continue. Investors’ confidence has not recovered from the shock of tax reform, and low copper prices continue to hurt  mining investment.

Meanwhile, Venezuela is in a full-blown economic crisis, with plunging GDP, widespread scarcity of basic goods and hyperinflation. Furthermore, energy prices will be lower in 2019, damaging economic conditions in Venezuela even further.

One advantage in the region is the so-called demographic bonus: all countries in the region have relatively large and young populations, which are expected to support economic growth in the next 10–15 years. However, challenges do lie ahead, namely the ability of the economies to make use of this future labor force.

Latin American construction spending will recover in 2019, but post gains at below or near global rates in the medium term. All large regional economies hold back the outlook this year, but progressive economic improvement and deferred investment will put Latin America back on a close-to-global track in 2020 and 2021. 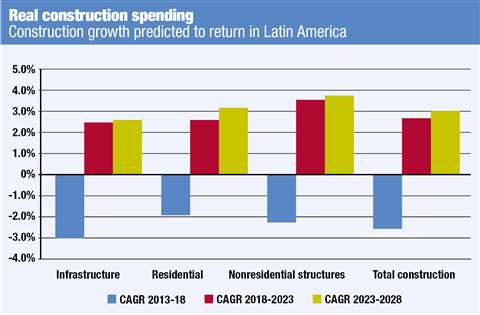 Construction growth should return to the region in the future

Infrastructure spending has borne the brunt of the slowdown as fiscal problems limited public investment. Brazil, Ecuador, Uruguay and Venezuela all reduced spending in 2015 through 2018. Apart from Venezuela, growth will return, but it will be limited.

We expect infrastructure spending for the region to average 2.4% growth over the next five years, and residential construction does not fare much better. Brazil is a source of weakness as high unemployment, tight credit and weak household income depress the market.

The growth leader is non-residential construction, which will gradually accelerate over the next five years with compound annual growth of 3.6%. While improving economic conditions will allow a modest revival in commercial and industrial structures, financial fundamentals will impede foreign direct investment.

Latin America continues to face significant challenges. While 2018 was a transition year, the return to growth will struggle. Key to the outlook is continuing global growth which will support higher oil and commodity prices. The risk is that the global economy fails to meet expectations in 2020, commodity prices remain weak, and Latin American construction markets continue to languish.