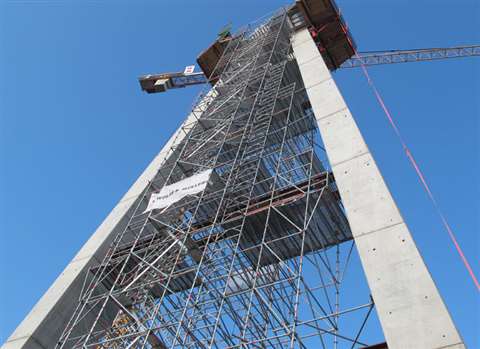 German scaffolding manufacturer Layher is providing scaffolding and shoring support for the construction of an A-frame pylon for a cable-stayed bridge in Germany.

Allround scaffolding and Allround TG 60 shoring frames are being used to complete work on the cable-stayed bridge being built over a railway line in Raunheim, Hesse.

To allow the 55 m high pylon to be built safely, shoring was used to disperse high loads in the area of a binding beam 36 m up. Birdcage scaffolding was also used to provide work platforms and a stairway tower to the A-frame pylon.

Bilfinger Schalungsbau was responsible for formwork and scaffolding as well as for planning and material supplies, working in co-operation with Layher’s technical office. Postweiler was brought in as the scaffolding construction company.