Monday April 20 was a significant date for Liebherr France. It was the day the company’s factory at Colmar reopened after an enforced closure due to the Coronavirus pandemic.

The manufacturing facility – 64 km (40 miles) south west of Strasbourg in the Alsace region close to Germany and Switzerland – had been out of action since March 17, almost five weeks, and it will be some time before it can approach the sort of production levels that were commonplace at the start of 2020. The company described the return to manufacturing as “progressive…because the market and the economy are progressive.”

For a small word, progressive is full of meaning, and an appropriate way to describe Liebherr France’s story so far.

Liebherr France opens new assembly line
One of the most recent examples of the company’s progressive thinking was its opening of a new assembly line in early 2019. A €5 million (US$ 5.5 million) investment, its main function was to produce the newly launched Generation 8 range of crawler excavators weighing from 22 to 45 t, immediately integrating 26 workstations and nine preassembly stations with the main line. 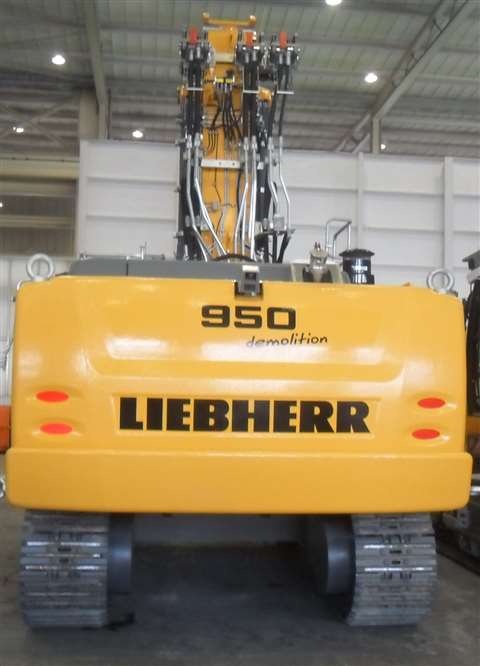 It is something that could hardly have been envisaged 70 years earlier, when dr Ing E h Hans Liebherr founded the company in Munich, Germany, just after the Second World War. As a family business, it was organised as “a decentralised and simple structure with straightforward, autonomous corporate units, a divisional structure”.

The same ethos drives the group today, with 11 divisions ranging from tower cranes to hotels. Colmar, the main site for the earthmoving division, opened in 1961, its proximity to the German border and the number of German speakers in the local area making it a preferred choice to anything further south.

These days it is backed up by operations in Germany, Austria, Russia, China and Brazil. It covers a total area of more than 36 ha (90 acres) with production capacity from its eight manufacturing halls totalling 140,000 sq m (1.5 million sq ft). It is also a technical centre, with close to 15% of the total workforce employed in product development.

Delivering a remote control R926 excavator to Finland
Since 2010 it has been separated from Liebherr’s manufacturing operatons for mining industry equipment, which is still in Colmar but on a different site. As the years progressed, the company found that it was essentially dealing with two different customer bases from the same premises; in terms of size the mining equipment was taking over where earthmoving left off.

But to use the term “earthmoving” in connection with Colmar misses something vital – demolition, where Liebherr first put down roots 30 years ago. The R950 and R960 demolition excavators in its range reach between 26 and 34 m (85 and 111 ft).

In recent years, as the company closes in on total sales of 500 demolition machines during the past quarter of a century, the two roles have increasingly converged. Last year the company delivered an R926 to Finland for remote control, eliminating the need for the driver to stay in the cab.

Other projects have the R956 produced with an adaptable boom on a telescopic stick. Where a customer has found a long reach attachment of greater value than high reach, that too has been accommodated. Deliveries of a prototype R940 and a one-off R980 to individual customers are planned for later in the year.

It continues the evolution of technology that goes back a long way.

“We had started with a demolition machine in the 1970s,” said Phillippe.

“It was a standard attachment and you put a demolition hook on it and tried to demolish.

Developing interchangeable excavator attachments in the 90s
“Then in the 1990s other companies started with interchangeable attachments. They had the basic boom and they could use either a demolition attachment or an earthmoving attachment. And we had a customer at the time, a German contractor called Hafemeister who asked us to do the same, because he wanted a Liebherr machine. 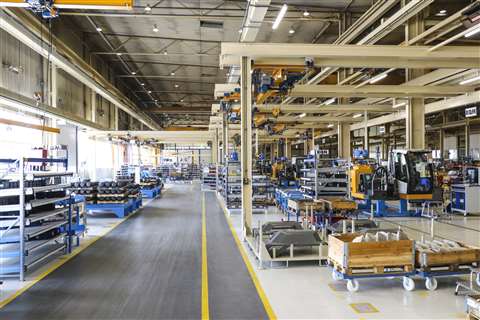 The new assembly line opened at Colmar in 2019

“So we delivered the first R954 with interchangeable attachments, and at the same time we developed the mechanical variable undercarriage or the hydraulic variable undercarriage. From there we went to the R974. It was a blue machine…then to this counterweight because it is easier to transport.

“At Liebherr we have no shear, no crusher, no breaker. We always let the customer choose the tool he wants and we check if everything matches together. Which means torque, on the tipping kinematic, the flow, and the pressure, and then we say yes or no because the customer knows what tool he wants, he has a good dealer in his area and he works with the dealer.

“To start now, to develop a new tool, well there are just so many people in the market.”

By eliminating human error through LDC, the excavator could go into an additional working area, so the extended reach made it possible to work on demolition projects with smaller machines.

“LDC gives a permanent indication to the driver of where his attachment is. We have only one display in the cab. It is in the right-hand corner at the top of the cab, because when the driver is on the job site he is always looking at height. We have three angled transmitters on the attachment on each point where you have a rotation, and the point must be in the middle, so the driver knows it’s a safe area. It is like a spirit level.

“The driver can choose about 20 tools, we put in the flow, the pressure and the weight, and when the time comes to change the attachment the computer knows exactly what reach it can go to.

“It’s foolproof. We give the driver green, orange and red zones. We have two modes, restricted and supervision. The restricted mode means if you have a driver who is very young and not safe with his movements, he goes into restricted mode, which means the machine will cut the movement – very slowly of course – at the end. The supervision mode means he can override what we would think is the limit of the machine, because sometimes in demolition you have to go a metre or two further just to pick something up and then come back. That is what we allow with these two modes.

A new demolition cab for improved driver vision
And Liebherr has not stopped there. It has developed a new demolition cab, where the windscreen has nothing in the driver’s field of vision that can affect his ability to see what he is demolishing.

“The tool fulfils the norm, of course,” said Philippe. 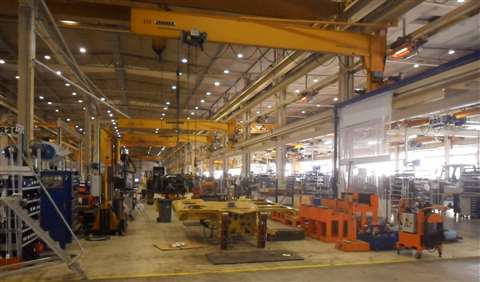 “At Liebherr, we do everything that has to fulfil the norm. That’s the rule that the Liebherr family tells us: ‘It’s my name, we have to do things right to the norm’. After we have the tiltable cab, we have the counterweight with dismountable pieces, and we have a hydraulic dismountable counterweight, so we have a cylinder you can move up and down. We have side protection and underneath protection because you in demolition you have concrete with steel. So there is a protection for the tanks and a protection for the cab. It’s something we developed for 30 years in tunnelling applications.”

For demolition machines, Liebherr France remains focused on Europe, though some products have made it into the Americas and a small number to Japan: “We are not focused on going to Japan at this time,” said Philippe.

Speaking before the Coronavirus outbreak, Philippe said: “It looks like France and Germany were waiting for Generation 8. The products will be here this year and next year the main products will be the Generation 8 excavators from 22 to 45 t. It is hard to say whether the market in 2020 will be better than the market in 2019, but with big projects like Grand Paris it will be OK.”

Like so many in the construction and demolition industry, Liebherr will view the rest of 2020, and possibly beyond, through a changed filter.

But on Monday April 20, the company took its first steps back towards that most central of Liebherr concepts, the norm.