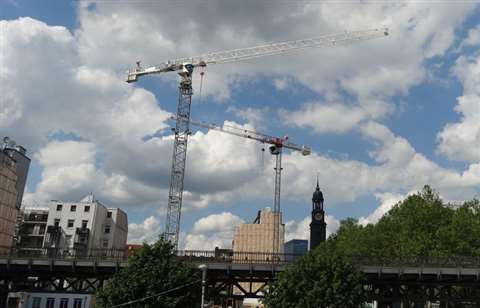 The project was completed on behalf of Köster AG. Challenges included a space, time and the weather. Detlev Proschwitz, Proschwitz general manager, said, “Projects in urban downtown settings are always associated with special challenges, and that’s especially the case when it comes to a big, lively city like Hamburg.

The first challenge was to erect the tower cranes at the site. This included navigating 13 trucks through the city streets and then finally working inside a limited area to assemble them. To keep the necessary road closures to a minimum, the cranes had to be erected quickly and efficiently.

The CTT 91-5 flat top tower crane was erected free-standing on a C38 cruciform base and with a jib length of 30 metres and a hook height of 40.8 m. With this setup, it was able to pick up loads of up to 3.3 tonnes.

The 8 tonne capacity CTT 161A-8 was erected on cast-in-place anchors with a jib length of 40 m and a hook height of 49.5 m. Its main task was to lift construction materials weighing up to 4.15 tonnes from the jib tip.

To work well in the city, the two Terex tower cranes were fitted with variable frequency drives to guarantee low inrush currents and protect the city grid from unmanageable voltage fluctuations. “If there was one thing we really didn’t want to do, it was to leave the Landungsbrücken Piers without electricity,” Proschwitz said.