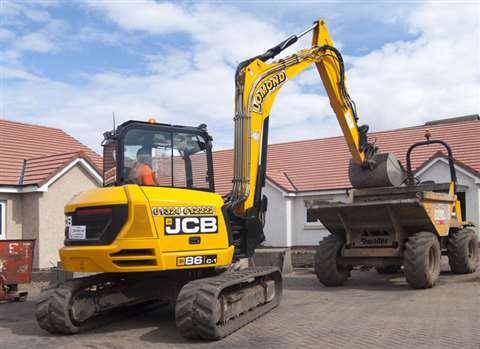 Scottish rental firm Lomond Plant Hire has invested in a new fleet of JCB machines worth more than £6 million (€7.5 million) to support its expansion – including some of the first new generation midi excavators to roll off the manufacturer's production line.

The rental firm said it had taken delivery of 45 new machines including more than 20 of JCB’s new 85Z-1 and 86C-1 midi excavators, which one of its customers claims are reducing his fuel costs by 40%.

Lomond Plant Hire joint managing director, Ross Easton said, “The feedback on the new midi excavators in particular has been exceptional. Operators have contacted me to tell me how impressed they are.

"They are more powerful, more responsive, easier to service, visibility is improved and the difference in fuel efficiency is massive. One customer believes he is saving as much as 40% in fuel getting up to four days work out of a full tank.”

The company said the new machines had already been put to work on a range of applications across Scotland and England, including projects at Edinburgh Airport, Edinburgh Royal Infirmary, Scottish Water and several large house-building contractors in the north west.

The company said many of the machines would be used to supply its new depot in St Helens, Merseyside, serving customers in the north west of England.