The City of London Corporation has granted planning permission for a new 305 m tall public attraction to be built in London, UK.

Named the Tulip, the building will offer a state-of-the-art cultural and educational resources for Londoners and tourists. Architects Foster & Partners - the designers behind the Gherkin (30 St. Mary Axe) -  said that one of its key features was an educational facility at the top of the Tulip. Offering 20,000 free places per year for London’s state school children, the educational resource will be provided by the projects developer, J Safra Group.

According to the company’s proposal, not only would the Tulip provide views of London from a height of around 300 m, it would also have gondola pod rides on the building’s façade. Complete with viewing galleries, sky bridges and internal glass slides, Foster & Partners said visitors would benefit from interactive materials and briefings from expert guides about the history of London. Complementing the experience will be a sky bar and restaurants with 360-degree views of the city.

In a joint statement, Foster & Parnters and J Safra Group said that an economic impact assessment by Deloitte estimated that the Tulip would offer economic benefits of almost £1 billion (€1.15 billion) in total monetised values by 2045, and would provide 600 permanent full-time jobs during 20 years of operations. 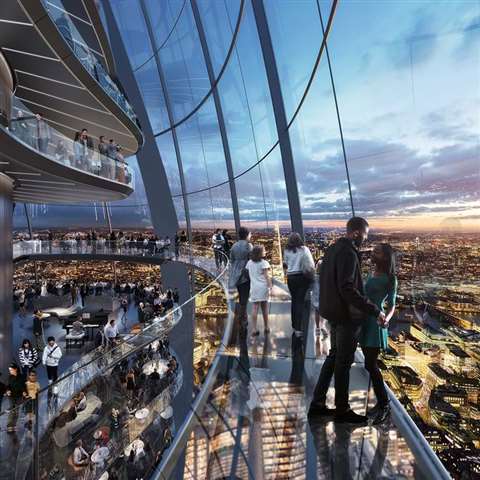 With the Tulip due to be constructed next to the Gherkin, Foster and Partners said it would bring real economic and social benefits for the local community and for London. A new pocket park has also been proposed, alongside a two-storey pavilion, for a publicly accessible rooftop garden and green walls. The architects said the Tulip supports the Mayor’s goal for London to be the world’s first National Park City.

Norman Foster, founder and executive chairman Foster & Partners said: “Continuing the pioneering design of 30 St Mary Axe, the Tulip is in the spirit of London as a progressive, forward-thinking city. It offers significant benefits to Londoners and visitors as a cultural and social landmark with unmatched educational resources for future generations.”

Jacob J. Safra said, “We are delighted to benefit from the exceptional talent of Foster and Partners in bringing to London this world-class visitor attraction. The Tulip’s elegance and soft strength complements the iconic Gherkin. We are confident in London’s role as a global city and are proud to offer its schoolchildren a state-of-the-art classroom in the sky to appreciate London’s history and dynamism.

The original planning application was submitted to the City of London Corporation in November 2018. It is estimated that the Tulip could take up to five years to construct, but that construction could begin as early as 2020.