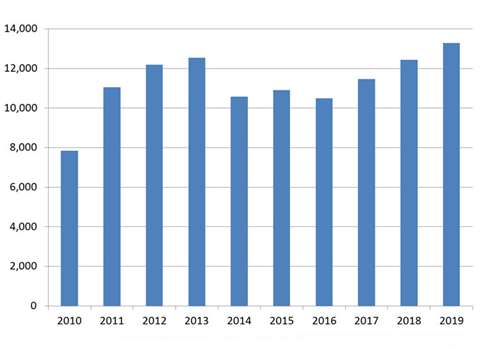 The market for construction equipment in Turkey is expected to grow more than +25% in the next five years, according to a new study by economic forecasting company Off-Highway Research.

Following a drop in sales in 2014, growth is expected to resume towards the end of this year. The market is expected to reach a record volume of more than 13,000 units of construction equipment in 2019.

The last decade has been marked with periods of rapid market expansion and periodic slumps, according to Off-Highway Research. This saw sales reach a previous record high of some 12,000 units in 2007. Sales since 2011 have exceeded 10,000 units per year, despite national and regional geopolitical tensions.

There is a strong preference for backhoe loaders in Turkey. Off-Highway Research said 4,200 such machines were sold in 2012. Crawler excavators are also popular, with sales exceeding 3,000 units per year over the last four years and coming close to 4,000 units in 2013. This makes Turkey the third largest crawler excavator market in Europe, behind the UK and Germany, but ahead of France and Italy.

Off-Highway Research said its forecast of future growth was based a long list of current and proposed infrastructure projects. Many of these are linked to the 100th anniversary of the founding of the Turkish Republic, which will be celebrated in 2023.

Among Turkey’s plans is an investment of US$ 368 billion in road, rail, and air and sea transportation infrastructure. This will include 20,000 km of new two-lane roads, 5,000 km of new motorways, 14,000 km of new railways and ten new airports. In addition, some US$ 140 billion is ear-marked for the energy sector and US$ 400 billion for urban regeneration projects.