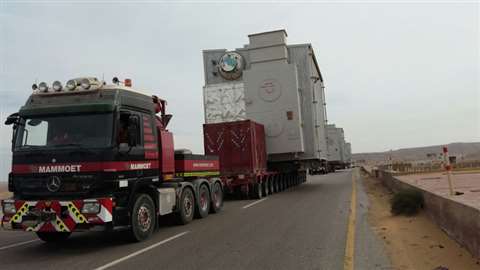 Mammoet, the world's largest international provider of engineered heavy lifting and transport services, has completed a contract to transport 16 heavy items for the Egyptian Refinery Company (ERC) in Mostorod, Egypt.

The project is the largest semi-government project underway in Egypt, a spokesperson said. The combined cargo weight is 1,700 tonnes and it is being transported using self propelled modular transporter (SPMT).

The cargo is being moved 247 km from Suez to Cairo. Challenges along the route include negotiating desert, mountain roads and highways. To complete the transport, more than 30 km of compacting and road reinforcement had to be carried out, including reinforcing five highway tunnels with steel beams and hydraulic jacks. In addition to transport preparations, 80 trees had to be cut and 250 light poles and more than 200 road barriers needed to be removed.

Other challenges along the way included transporting the cargo on 4 % inclines through Cairo. On arrival at the Mostorod site in Qalubiya, Mammoet cranes with 1,600 and 750 tonne capacities were used to install the heavy items.

The majority of the cargo was received at Suez port between August and December 2014 with the last item arriving in July 2015, a company spokesperson said. Transport of 16 items was started on 1 October. The remaining transport will take a minimum of five months to complete.

The 16 items included the reactors weighing 79 and 140 tonnes each. The largest piece of cargo was a hydro refining reactor weighing 1,220 tonnes. The reactor was transported over 45 days by three trains of 34 axle lines of SPMT in a 102 axle configuration.

The Egyptian Refining Company (ERC) was incorporated in July 2007 to upgrade the existing refinery for the production of diesel and LPG.