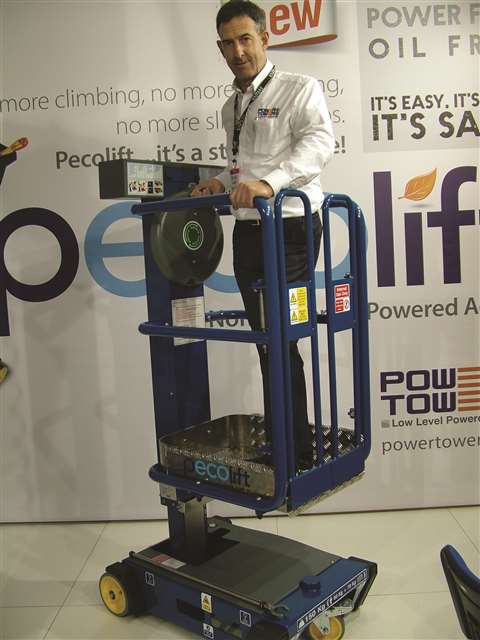 The influence of low level access has yet to be felt on a truly global scale, yet it is one of the fastest moving access product sectors. It is only a matter of time before safety standards bring these products to the fore Internationally. AI reports

The UK is one of the strongest markets for low level access and is taking some of the biggest steps in product development.

Now comes the Pecolift, a push-around platform with a maximum working height of 3.5 m. It may look a bit like the Nanos, but there is a big difference, because the peco has no battery or power source, and is raised to its (modest) height by arm power alone.

Power Tower owner Brian King doesn’t want to give away too much detail on the technology behind the winding mechanism, except to say that the gearing mechanism in the mast stores energy and is a bit like the gas strut used to raise a car bonnet, “but more than that”.

AI tried it out and can vouch for the 11 second time it takes to wind up to the full height and also the claim that minimal physical effort is required. Indeed, raising the platform takes almost no effort.

Mr King says the Peco is the fruit of two and a half year’s work and that the end result is a “maintenance free, oil free platform” that will target the market for both low level powered platforms and podium steps and stepladders.

The Pecolift is also heading to the rest of Europe with subsidiary Power Towers Deutschland having put the product into its range at the end of February. Mr King added that French rental giant Kiloutou had also purchased the Pecolift, along with 180 of the manufacturer’s Nano SPs.

In total, some 1000 units have already been sold - including big orders with UK tool hirer Hire Station and Nationwide Platforms - and dozens of units are currently on site at major projects in London, including the new St Barts hospital.

“Our big surprise,” says Mr King, “is that we thought it would be the price [around £2900] and the hire rate that would drive it, but the main thing is the fact that you don’t need power – no batteries, no charging issues, no need for a power source on site. You get rid of all that in one go.”

One concern might be the reliability of the gearing mechanism in the mast. Mr King says the system uses a cam belt rated for 1.5 to 2.0 million cycles, equivalent to many years of constant daily usage. The unit is sold with a three year warranty, and if the spring needs replaced it will cost just £100. “It is absolutely a game changer”, says Mr King.

From Euro Towers comes the Stairpod 500 podium; it was launched at the UK’s Executive Hire Show in February, as was the pecolift. Podiums have been the subject of a recent safety drive in the UK. Roger Verallo, Euro Tower’s managing director is chairman of UK-based PASMA (the Prefabricated Access Suppliers’ and Manufacturers’ Association), and was asked to represent the association during the creation of PAS 250.

As Mr Verallo explains there is no EN standard that covers podiums, “So PAS 250 is the first step to a European standard. Once manufacturers have PAS 25 products then customers can take their choice as to whether they buy one that conforms to that standard.

Publicly Available Specification (PAS) 250 was sponsored by PASMA and its development facilitated by BSI Standards Limited and published under licence from the British Standards Institution (BSI).

“When the Work at Height Regulations 2005 came in the ladder manufacturers suffered badly. The presumption was that step ladders were not allowed to be used, but that was totally wrong. You must use a proper risk assessment for working at height and you must use the right equipment - with a podium you are protecting yourself at height.”

Youngman has introduced a cross between a ladder and a podium. A prototype of the Megastep was shown at the Executive Hire Show last year but now it is in full production. It is made from non-conductive fibreglass, has handrails and safety chain for added security and is compliant to European ladder standard EN131. It measures 370 x 568 mm and has 85.3 mm wide steps with 85.33 mm distance between them. The Megastep comes in a range of sizes from two-tread and up.

He said there was a trend towards bigger platforms as work at height regulations reduce the time you spend on step ladders and the way you use them.

In response, Youngman introduced the P1200 podium, one of a range of anti-surf podiums, including the P1000 and P1500. Launched in the last 12 months, it features slip-resistant front feet and fits through a standard doorway when folded. Part of the Youngman P-Series Podium family, it has two platform heights: 1.21 and 1.44 m. It also has guard rails to comply with work at height regulations, captive deck and stairs and is designed to be stable when folded for transport and when opened into work mode.

They have rubber feet on both legs on one end, which means they cannot be pulled along while the operator is on them. “The user has to get off, and then move it.”

Once the operator has de-mounted the unit, racking bars are available for pushing it along on the wheels attached on the other side.

According to Snorkel, the introduction of self-propelled low-level access platforms will improve penetration in North America. “In our experience the US equipment rental companies are much keener on self-propelled machines for low-level access than push-around products,” says Enrique Garcia Delgado, regional sales manager for Europe.

“The UK is by far the most developed market for low-level access platforms and we are still only scratching the surface I think. There is enormous untapped potential in retail, logistics and facilities management, while we can also do more to increase the use of low-level access in its core market of construction.”

Snorkel owns the global licence to design, manufacture and market the Pop-Up range of low-level access platforms. It also produces its own low level access platform in the M1230E 3.6m (11 ft 10 ins) self-propelled mast lift. Snorkel has also enhanced its M1230E with a 500 mm roll-out deck extension. This optional extra extends the platform size to 1.46m, providing additional reach without the need to move the machine.

The M1230E all-electric lift can be driven through standard interior doorways and carried in passenger elevators but will lift two people with tools to a safe platform height of 3.6m. At bauma 2013 the company will showcase a prototype self-propelled 10 ft mini-scissor lift.

Mr Delgado adds, “The UK remains the leading market for low-level access. We are starting to see some uptake in markets where powered access utilisation is high, for example Western Europe and Scandinavia. But it is still in its infancy.”