Malcolm Davies, managing director at Davies Crane Hire, said, “We are delighted to have taken delivery of our fifth LTM 1060-3.1. They are an essential part of our fleet often specifically requested by our customers for their boom length and lifting capacity. The LTM 1060 is the best crane in its class so it’s an easy choice. The VarioBase is perfect for those tight awkward spots that other manufacturers similar capacity cranes would fail to achieve. It is also a favourite amongst operators because it is so user-friendly.”

The crane was handed over to Davies Crane Hire after being on display at the Vertikal Days trade show in the UK in May. 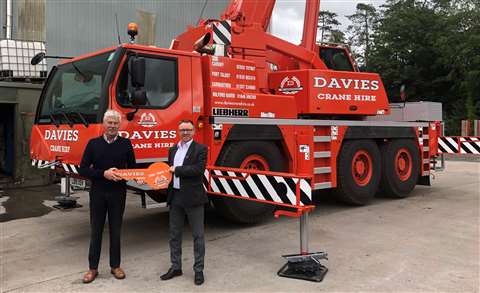 The official handover of the new LTM 1060-3.1. Left to right: Malcom Davies of Davies Crane Hire and Steve Elliott of Liebherr-Great Britain