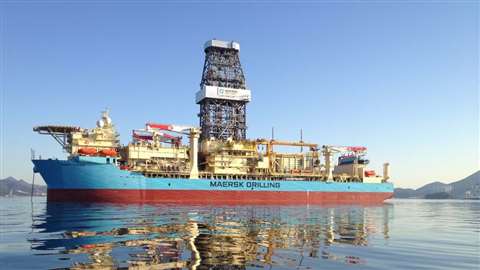 The Maersk Voyager will drill to a water depth of 3,628 metres

As part of a campaign that aims to strengthen the development of the region’s oil and gas industry, Maersk will drill to a water depth of 3,628m in Block 48 off the coast of Angola, using the ultra-deepwater drilling vessel Maersk Voyager.

Morten Kelstrup, chief operating officer at Maersk Drilling, said, “We are thrilled to once again push beyond existing boundaries in collaboration with Total, drawing upon our mutual experience from the exciting deepwater exploration projects we have collaborated on over the years.”

The Block 48 well is part of a US$46.3 million (€41.7 million) contract for the exploratory drilling of three wells off the west coast of Africa. A second well will be drilled in Angola’s Block 32, with a third off the coast of Namibia to be drilled to shallower depths.

At 3,400m deep, the Raya-1 well off the coast of Uruguay has held the world record for the deepest offshore well since 2016. According to the Danish drilling company, the well was drilled by Maersk Voyager’s sister drillship the Maersk Venturer.

The drilling project, which begins this month, is expected to take 240 days to complete.