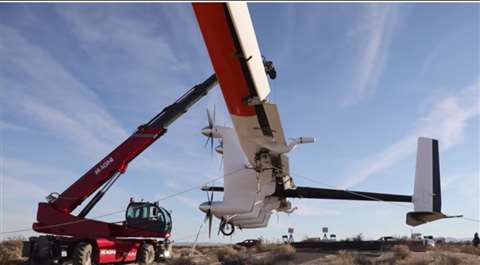 Italian equipment manufacturer Magni Telescopic Handlers has revealed how its RTH 6.35 rotating telescopic handler model was used to assist in the development of a new renewable energy technology.

For the past 13 years, US-based company Makani Power has been actively developing an airborne system to make harnessing wind energy more accessible and cost-effective than traditional wind turbines.

In the testing of the energy kite, the RTH 6.35 model was used with various attachments including a platform, winch and fork carriage.

A specially designed attachment was also created for the project, which according to Makani, resulted in the world’s first offshore flight of an airborne wind turbine.

Magni said, “It was a very heartfelt collaboration, first of all because Magni has always been devoted to seeking and supporting sustainable solutions and secondly because new ideas are the forge that feeds the passion of our Team.”

While the development of Makani’s energy kite has now come to an end due to lack of investment, the project has become the subject of a US documentary.