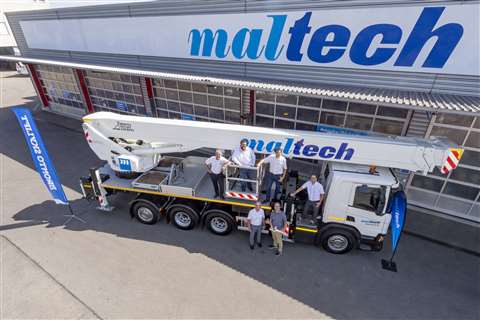 The Bronto and Maltech teams at the handover of the X50XDT-J truck mount.

Maltech recently received the 50m working height S 50XDT-J that includes a two-section telescopic boom and an up-and-over reach that allows access to rooftops and bridges.

Bronto said the handover marks the 50th anniversary of the manufacturer’s relationship with Maltech.The two companies, which at one point even operated from the same building in Switzerland, began their collaboration in the late 1960s.

Dominik Keller, European area manager for Bronto Skylift, said, “We were probably the first to implement a long jacking system used to level the units in hilly areas. That was critical for Maltech, because Switzerland is so hilly and mountainous.

“They also pushed us to develop our remote service functions. Today, Brontos come equipped with a modem so we can provide assistance from anywhere.”

Eric Hunziker, CEO and co-owner of Maltech AG, added, “I think this was the start of the win-win situation.”