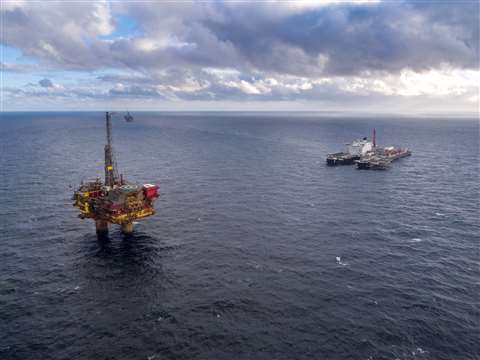 Pioneering Spirit in the Brent field 1

A pair of world records have been claimed for the lift and load-in of a 24,000 tonne oil platform topside for decommissioning.

Offshore contractor Allseas from the Netherlands used its giant twin-hull vessel Pioneering Spirit for what was claimed as the heaviest single lift ever, to remove Shell UK’s Brent Delta from its three leg concrete base. The platform was lifted on 28 April before being towed towards Hartlepool, on the north East coast of England. It was then transferred to a barge for transport into port where international heavy lift and transport specialist Mammoet claimed a world record for its load-in operation to get it ashore.

Shell’s Brent Delta, measuring 74 metres long x 72 m wide x 130 m tall, including the flare stack, was the largest ever topside ever brought in for decommissioning. For the load-in Mammoet used 436 skid tracks, 64 skid shoes and 36 push-pull units. On the purpose-built cargo barge, Iron Lady, Mammoet pre-installed its skidding system. At Able Seaton Port a new stronger quay was built, for £28 million, to receive the platform. When the barge came in it was grounded on a grounding pad in front of the quay. This, combined with preparing the skidding system beforehand, saved time and was safer, Mammoet said. Skidding time for the load-in was nine hours. The complex operation was more than five years in preparation, according to Mammoet, which also acted as an advisor on the project.

Brent Delta operated at a water depth of 140 metres in the North Sea’s Brent field, between Scotland and Norway, for 40 years and will be dismantled over the next 12 to 18 months. Around 97 per cent of it, much of it structural steel, will be recycled. More than 100 platforms from the North Sea are likely to require decommissioning in the next ten years.

Fast lift of the Delta topsides

Transport of the Delta topsides to Hartlepool

Mammoet’s load-in of the Brent Delta